Horizons is bringing the red, white and blue in a new cannabis ETF

The creator of the first marijuana exchange-traded fund is looking at expanding its cannabis roster, with plans for U.S., leveraged and inverse offerings.

Horizons ETFs Management Canada Inc., provider of the Horizons Marijuana Life Sciences Index ETF, is “actively pursuing” the creation of a fund that will contain only U.S. licensed producers, according to Chief Executive Officer Steve Hawkins.

“We’ve had a lot of investor inquiries saying, ‘HMMJ is great but I want exposure to the underlying U.S. marijuana market directly,”’ Hawkins said in a phone interview.

HMMJ, as it’s known, can’t hold any firms with U.S. marijuana operations because the Toronto Stock Exchange prohibits the listing of companies that aren’t compliant with federal law where they operate. This leaves it in the odd position of being unable to hold about a quarter of the stocks in its underlying index.

The U.S. pot market is expanding rapidly, with legal spending expected to reach US$22 billion by 2022, according to Arcview Market Research and BDS Analytics. This is reflected in the growing number of large U.S.-focused cannabis companies listing on the Canadian Securities Exchange, which is one of the only exchanges that will accept them. Seven of the 10 largest pot stocks by market value are now focused primarily on the U.S. 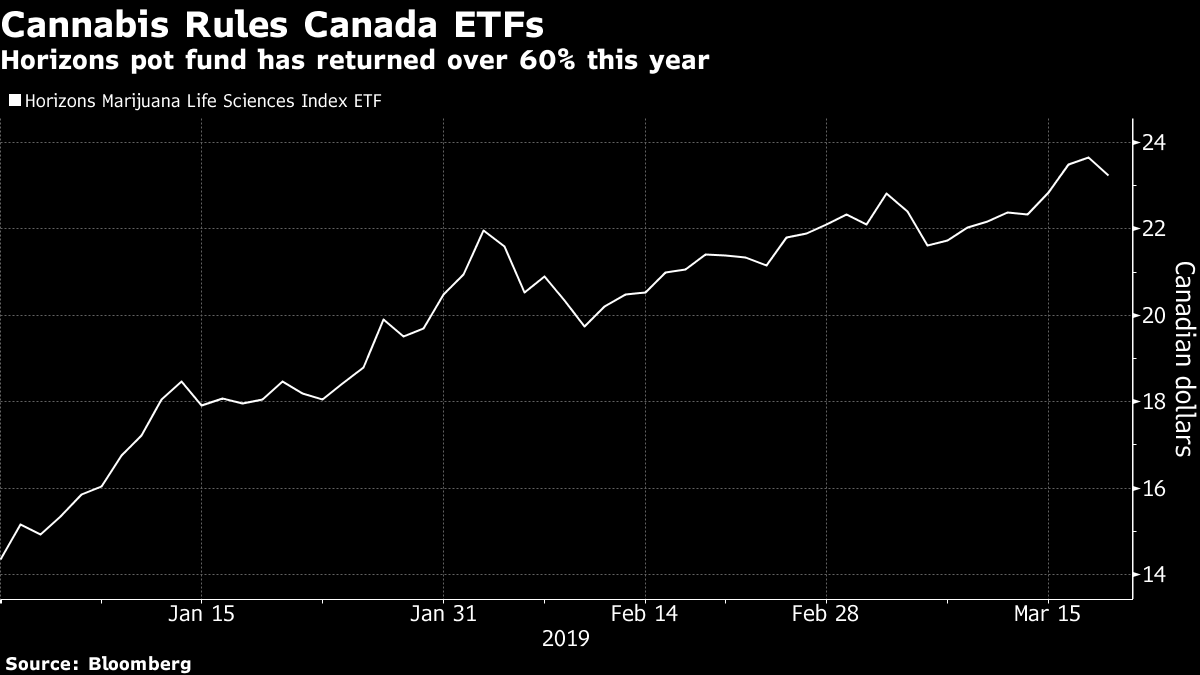 In a rare exception, HMMJ added Boulder, Colorado-based Charlotte’s Web Holdings Inc. earlier this week because it deals only in hemp-derived products, which are now legal. Horizons has not yet filed a prospectus for the U.S. marijuana ETF, which would not trade on the TSX, Hawkins said.

The firm has filed prospectuses for a leveraged ETF that aims to return double the daily performance of the underlying marijuana index, as well as an inverse ETF that will return the opposite of the index using derivatives. However, it’s no longer planning to launch the leveraged inverse marijuana ETF that it filed for last summer, Hawkins said.

“We don’t feel that product is right for the marketplace at this point in time,” he said. “Maybe down the road when the cannabis market becomes more established and more predictable from a qualitative perspective, then we might revisit the issue.”

HMMJ is the largest Canadian cannabis ETF, with more than $1 billion  in assets. It has returned over 60 per cent this year, making it the best-performing equity ETF listed in Canada.

South of the border, the ETFMG Alternative Harvest ETF, with US$1.2 billion in assets, does not include any companies growing or distributing marijuana in the U.S. either because the drug remains illegal at the federal level.