Tilray Inc. (TLRY.O) shares climbed as much as 4.6 per cent before turning negative as investors weighed a mixed quarter that saw a wider-than-expected loss and higher operating costs even as revenue beat estimates.

The company expects 2019 revenue to at least triple from last year’s US$43 million. And during the earnings call, management boasted of its ability to meet growing U.S. demand for hemp-derived CBD, the non-intoxicating cousin of THC, via its recent Manitoba Harvest acquisition.

"We expect strong industry growth long-term, and we believe Tilray is well positioned to be one of several likely winners, especially given its relationships" with partners like Novartis AG and Anheuser-Busch InBev SA, wrote Piper Jaffray analyst Michael Lavery.

However, some analysts questioned whether the stock’s valuation has gotten ahead of itself, as Tilray is significantly more expensive than its peers which have higher revenue.

“This stock remains the most expensive in the space by far and yet its revenue trails significantly below closest peers,” including Canopy Growth Corp. and Aurora Cannabis Inc. Bennett notes that CannTrust Holdings Inc. is expected to report revenue similar to Tilray’s when it releases earnings later this month and yet its market value is about US$1 billion versus Tilray at US$6.8 billion.

Tilray argued on its earnings call that the Canadian market will be insignificant compared to the U.S. and European opportunities and said it has no plans to bolster its Canadian supply through acquisitions. “We think this is a risky strategy near term given its multiple, especially as investors will be increasingly looking to Canada as evidence of a company’s ability to execute, and international is yet to contribute in any material way to sales,” Bennett writes. “We also think Tilray could be overestimating the size of the U.S. hemp CBD market, which they quote as a US$22 billion opportunity.”

Rates Tilray underperform with a price target of US$61.

Although Tilray is “well positioned to be one of several likely winners” in the longer term, Lavery expects negative earnings to persist in the near term as the company remains in investment mode. “The Canadian market may become profitable as it ramps up, but we do not expect positive total company Ebitda over the next five to seven quarters.”

“We consider the focus on growth opportunities outside Canada to be strategically sound and to be a better way to build brand equity with consumers,” particularly in the U.S. CBD market and European countries that don’t have local production.

The market will focus on Tilray’s top-line results despite the larger-than-expected loss, “as Tilray remains in the early stages of building out its capabilities in the Canadian and international markets.” Investors will also play close attention to Tilray’s preparations for the U.S. CBD market, where it expects regulatory clarity by the end of the year.

“We expect Tilray to rely heavily on the knowledge, infrastructure and assets gained in the Manitoba Harvest acquisition, including its distribution network of 16,000 retailers, to play a pivotal role in its go-to-market strategy. We would not be surprised to see Tilray invest additional capital in its U.S. CBD supply chain, specifically in areas such as extraction, manufacturing and formulation.”

“Based on our view for Tilray to gradually ramp recreational sales over the near term and pending more visibility on the timing and regulatory framework to introduce hemp-derived CBD products in the U.S., we consider the company’s valuation to be elevated versus some of the other large LPs.”

Rates Tilray underperform (speculative) with a US$65 price target. 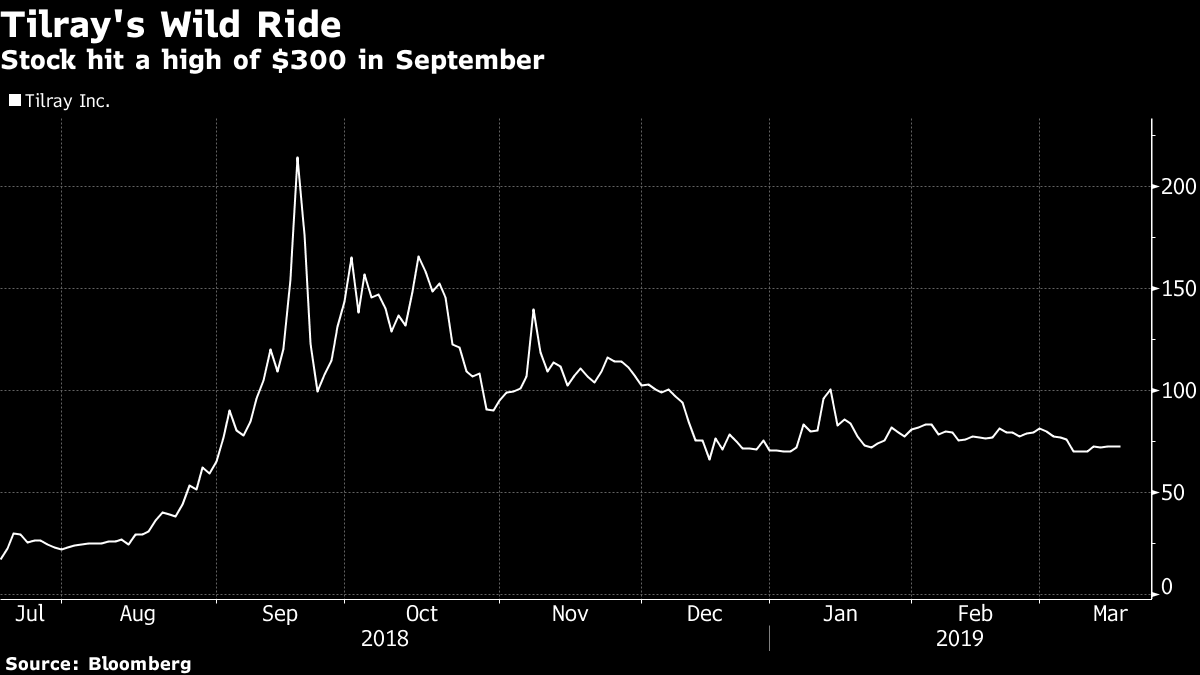