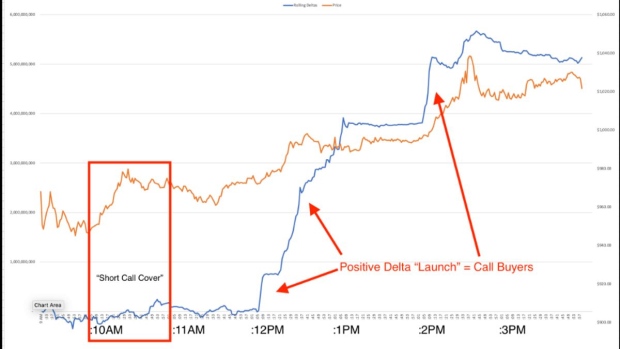 (Bloomberg) -- There were plenty of reasons for Tesla Inc. to rally Monday. Everything from Hertz Global Holdings Inc.’s blockbuster order to buying by passive funds and a squeeze on short sellers.

But other forces were at play in goosing the gain: options traders who piled on bullish bets, and market makers who were forced to purchase shares to hedge their positions as the stock surged.

In other words, the tail wagging the dog. It’s a narrative that’s come up repeatedly in explaining mysterious moves, such as the big-tech rally in the summer of 2020 and this year’s mid-month market swoons.

Investors spent $5.11 billion on call options, compared with a total of $279 million on puts, according to an estimate by Nomura Securities. The firm calls the 18-to-1 ratio “unheard of.” And all the spike in calls means options dealers needed to snap up shares to avoid unwanted risk.

“This is incredible activity,” Chris Weston, head of research at Pepperstone Financial Pty, wrote in a client note. “We’ve seen a clear lack of regard for the cost of the options,” he added. “The stock subsequently goes in the money and dealers (who sold the calls) have to hedge their delta –- that means buying the underlying –- again this perpetuates the stock higher.”

Shares of Tesla surged 13% Monday, lifting its market value above $1 trillion for the first time and propelling the automaker past Facebook Inc. to become the fifth-largest publicly traded company in the U.S. Up more than 30% this month, the gains have also made Chief Executive Officer Elon Musk the world’s richest person.

Tesla climbed for the 11th time in 12 days, rising 4.8% as of 10:20 a.m. in New York Tuesday. Again, calls dominated option trading, with bullish contracts accounting for nine of the 10 most active ones.

Read: Tesla Is Towering Over Megacap Tech in the Options Market

The interplay between the equity and options markets can be complex. To illustrate the dynamics, Brent Kochuba, founder of analytic service SpotGamma, plotted Tesla’s stock against delta, or the theoretical value of stock required for market makers to hedge the directional exposure resulting from all options activity.

In the simplest form, when someone buys calls, a dealer must buy Tesla’s stock to hedge the delta exposure generated by those options trades. If the stock keeps rising, it forces dealers to buy more shares, a process know as gamma hedging.

According to Kochuba’s analysis, Monday started with traders selling calls, which led to a slight negative delta reading. As the stock started to lift off around 10 a.m. in New York, these call sellers were forced to cover their positions. That coincided with Tesla’s share advance toward $980.

Around noon, traders began flooding in to purchase calls, sparking a surge in delta hedging that accompanied Tesla’s ascent toward $1,000. Then two hours later, another wave of call buying hit the market. The stock peaked near $1,045, right before the estimated delta hedging started to taper off.

Notably, half of the calls traded were maturing Friday. The Tesla $1,050 call expiring exactly that day -- the second most active contract on Monday -- surged to $18.19 from 71 cents, a 25-fold increase.

“This was an incredible push by short duration traders to push into calls,” said Kochuba. That “ likely forced market makers to aggressively hedge long.”

The fact that all the trading was concentrated in short-dated options can be viewed as a tactic by some traders trying to take advantage of a phenomenon known as a “gamma squeeze” -- betting that as the value of Tesla shares gets closer to an option’s strike price, dealers will have to buy more and more of the underlying stock.

“This is the definition of ‘weaponized gamma,’” said Nomura strategist Charlie McElligott.

Read: Playing With Volatility? Get to Know ‘The Greeks’: QuickTake

In some way, this technical explanation may help shed some light on why Tesla’s stock looks unhinged from business fundamentals. At Monday’s close of $1,025, the stock was already 38% ahead of where analysts see it stand 12 months from now.

Of course, not all options buyers are ignoring Tesla’s fundamentals, and it can be true that analysts simply have underestimated the company’s potentials. Still, a case can be made that many traders may have been lured into this momentum-chasing game regardless of the outlook of car deliveries.

Consider Monday’s open interest. While the trading volume of calls doubled from the previous day, open interest only increased by toughly 5%. In other words, a large portion of the volume came from day traders.

“Tesla continues to make a mockery of analysts’ valuation models,” Weston at Pepperstone said. “Trading it is the very essence of buying high and selling higher.”

To Kochuba at SpotGamma, while Monday’s options activity helped push the stock higher, the boost is getting shaky. For one, the cost of options has become more expensive. Plus, more than 30% of dealers’ gamma exposure is expected to drop off upon Friday’s expiration, meaning hedges will be forced to adjust quickly in coming days.

“I believe that creates a vacuum for higher but unstable stock prices,” he said.