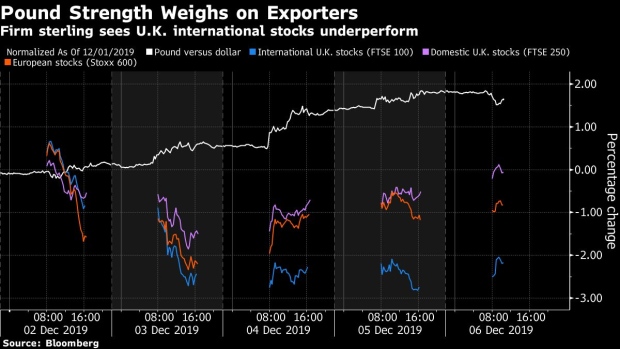 An employee views a FTSE share index board in the atrium of the London Stock Exchange Group Plc's offices in London, U.K., on Wednesday, May 29, 2019. While the FTSE 100 Index has climbed about 15 percent since June 2016 in local currency, it's down in both euro and dollar terms. Photographer: Luke MacGregor/Bloomberg , Bloomberg

(Bloomberg) -- Anything is still possible for next week’s U.K. election, but one outcome would suit many stock investors better than most.

“For equities, the best result is a decent Conservative majority,” said Kim Catechis, head of investment strategy at Martin Currie, an affiliate of Legg Mason Inc., managing about $17 billion.

A decisive victory for Boris Johnson would see domestic shares outperform, according to Catechis, who wrote in a report this week that such a scenario would lead to increased fiscal stimulus, reduced uncertainty and falling risk premiums. Optimism that the Tories will win a majority in next week’s vote has led to sterling’s longest winning streak since June.

By contrast, a Labour majority would clearly be the worst outcome for stocks, said Rupert Thompson, head of research at 1.9 billion-pound ($2.5 billion) fund manager Kingswood, particularly for sectors such as utilities and transport that have most to lose from Jeremy Corbyn’s nationalization plans.

For those betting on a rally, it’s as well that the Conservatives are ahead in the polls. However, these have been wrong before and even if they prove accurate, a likely rise in the pound following an outright Tory win would be sure to weigh on international companies that earn large proportions of their revenue outside the U.K.

Here’s a look at how each possible election outcome might affect U.K. stocks.

As Catechis notes, a Conservative majority would likely boost risk appetite. Cyclical stocks whose earnings are tied to economic prosperity would probably see the biggest benefit, such as banks, real estate and retail.

However, given many stocks from those sectors rallied over the past few months as no-deal Brexit risk receded, the upside might be contained.

Take home-builders, for example, one of the sectors most impacted by economic uncertainty stemming from Brexit. Liberum analysts Charlie Campbell and Marcus Cole cautioned in a note on Thursday that the market has already priced in a 10%-15% improvement in profits in expectation of a calmer political outlook.

Those policies would “clearly hit particular segments of the market hard,” as the businesses would probably be purchased at below market price, Thompson wrote in a November report. Utilities such as SSE Plc and postal operator Royal Mail Plc are among stocks that may have most to lose.

But it’s not just Labour’s plans on public ownership that have sections of the market worried. Corbyn has also vowed to roll back tax cuts seen under the Conservatives and to force larger companies to hand equity stakes to staff, while introducing a levy on overseas companies buying housing in Britain.

In the event of a hung parliament -- as was the case in 2017 -- the impact on equities is less straightforward.

Were Johnson able to stay in office by forming a coalition, but without explicit support for his Brexit plan from the partnering party, domestic-focused sectors such as housebuilders and retailers would likely fall due to the potential for a no-deal Brexit to return to the table, according to Colm Harney, a U.K. equity analyst at asset manager Sarasin & Partners.

By contrast, domestic U.K. stocks might respond positively should the Conservatives team up with a remain-backing party like the Liberal Democrats and agree to a second Brexit referendum, given the potential combination of Conservative policies and an abandonment of the divorce, Harney said in emailed comments.

While the immediate stock market reaction to a Labour minority would likely be negative, the make-up of the government would determine the longer-term reaction, according to Harney.

“A broad alliance, including the Liberal Democrats and the Scottish National Party, would be the most positive outcome, as the smaller parties would likely block the most economically damaging Labour proposals,” he said. Such a scenario might benefit stocks such as Royal Bank of Scotland Group Plc and Lloyds Banking Group Plc.

Labour teaming up with just one party, such as the SNP, to form a coalition government could be negative for stocks, however, if it looked like Corbyn might be able to implement large proportions of his manifesto, Harney added.

To contact the editors responsible for this story: Beth Mellor at bmellor@bloomberg.net, Paul Jarvis