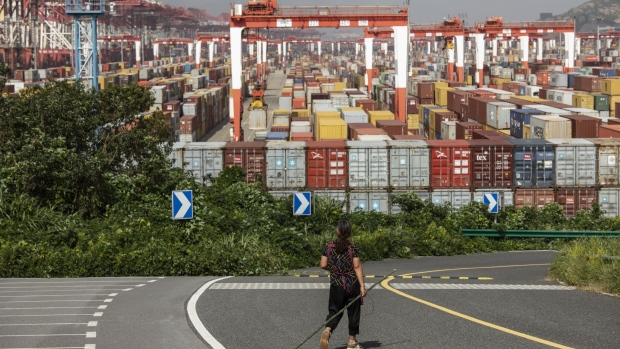 (Bloomberg Markets) -- As coronavirus deaths climb, a war rages in Ukraine, and stock markets tumble, investors may find it helpful to take a longer-term view. In the three decades since we published our first issue of Bloomberg Markets, globalization and digital technologies have reshaped finance and the world economy. The following pages provide data showing the evolution of trade, economic growth, financial products, investing, and wealth. The big trends in finance have survived other military conflicts (the Iraq War) and financial crashes (in 2000 and 2008).

World Trade Changes the MapAsian and Latin American countries were among the biggest winners from three decades of globalization, as comparatively low labor costs turbocharged their exports. Japan lagged behind the US and Germany in export growth, and Russia’s position stagnated following the collapse of the Soviet Union.

Great Leap ForwardChina’s economy has ballooned in the last 30 years. Now it rivals that of the US.

Changing FortunesJapan and Germany ceded their economic positions to China, while India overtook France, Spain, and Canada. Russia climbed into the top 10, then fell back out.

Borrowing BonanzaCorporations and emerging countries turned to the debt markets to fuel growth as investors gobbled up even low-yielding fixed-income securities.

Money for NothingInterest rates plunged after the 2008 financial crisis and the Covid-19 pandemic.

Shares Get SupersizedThe 2000 dot-com crash and the 2008 financial crisis look like blips in the US stock market’s three-decade climb. Central bank easing played a crucial role, though.

The Eclipse of the Energy SectorOil and gas companies fell out of favor, and investors turned to fast-growing tech companies, driven in part by consumers moving to the internet. But energy companies are staging a comeback in 2022, and tech stocks are plunging.

Moving to the ExchangeETFs have swept up money that once went into mutual funds.

A Mixed Story in DerivativesOver-the-counter interest-rate derivatives remain popular, but contracts on commodities and credit fell out of favor after the 2008 financial crisis.

Putting More Money to WorkBy 2019, US families said they had more than 40% of their wealth in financial assets. Most of the growth was in retirement accounts and pooled investment funds.

The Shareholding HalfIn 2019 about half of US families said they owned stock directly or indirectly.

Going Online for AdviceAlmost half of US families were looking for investing ideas on the internet by 2019.

The New RichForbes’s richest man in 1992 was a Japanese real estate investor. Not today.