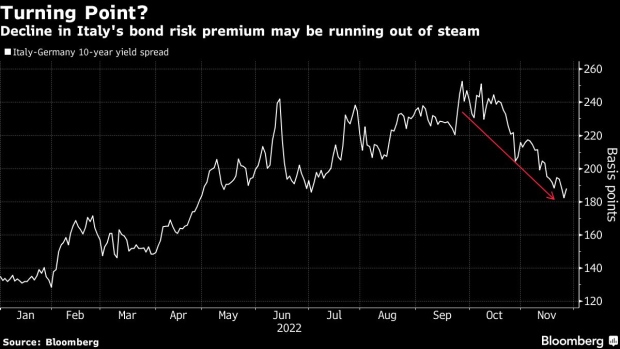 Visitors take selfie photos with the Duomo Cathedral on Duomo Square in Milan, Italy, on Tuesday, Nov. 15, 2022. Inflation in Italy accelerated to 12.6% in October from 9.4% in the previous month, driven by surging energy prices, as well as an increase in food costs. Photographer: Francesca Volpi/Bloomberg , Bloomberg

(Bloomberg) -- Italy’s bonds are heading for their biggest gain in nearly three years this month, leaving analysts wondering how long the rally can last.

The nation’s debt is in vogue on bets that a recession in the euro area will slow the pace of European Central Bank interest-rate hikes. That’s driven down yields on 10-year bonds by more than a percentage point from a nine-year high in September, and cut their premium over Germany -- a gauge of risk in the region -- by the most since 2020.

Yet much of the bond market’s gains so far have been driven by traders taking short bets off the table, rather than adding fresh long positions. Outstanding positions in Italian 10-year bond futures have slid 20% in recent months, the kind of fall last seen after the pandemic first struck in early 2020.

And there’s still a considerable list of risks, from the potential for a right-wing coalition government to blow the budget to the European Central Bank starting bond sales. That’s got strategists at Citigroup Inc. and Societe Generale SA calling for bets against the rally.

“Is it going to last going into next year? No,” said Annalisa Piazza, fixed-income research analyst at MFS Investment Management, adding risks included further aggressive ECB rate hikes or a “policy mistake” by the new government.

The former is at the heart of the debate in global markets as traders watch for any signs that global monetary tightening is peaking, with ECB officials sparking a renewed slump in Italian debt Friday by saying it may be premature to scale back rate increases. The latter is a perennial problem that keeps Italian bond investors on their toes.

It’s been reawakened by the victory of right wing populist leader Giorgia Meloni in this year’s elections, after a period of calm with former ECB chief Mario Draghi at the helm.

So far Meloni has taken a moderate stance on the issue that matters most to bond investors: containing spending. But there is mounting concern among Italian officials that domestic tussles with her deputy and populist rival, Matteo Salvini, could jeopardize her commitment to fiscal restraint and even the stability of the administration.

At the moment the premium investors demand to hold Italy’s debt over haven Germany is under 200 basis points, well below a danger zone for the country seen starting at 250-300 basis points. Citigroup, Societe Generale and Commerzbank AG all see it returning to that level in coming months.

For Citigroup fixed-income strategist Aman Bansal, the risk is that the ECB will follow up another big rate hike next month with a shift to begin winding down its bond holdings. ECB officials have said they plan to discuss this so-called quantitative tightening at their Dec. 15 meeting, with some pushing for a start in early 2023.

Italy’s bonds have been a major beneficiary of the ECB’s bond-buying stimulus, and subsequent steps to limit the fallout from tighter financial conditions. That has included flexible reinvestment of its maturing bonds, but Citigroup only expects the measure to be used sparingly next year.

Why Europe Has a New Weapon for Bond ‘Fragmentation’: QuickTake

Others think the so-called BTP market will also take a hit early next year when European governments are likely to kick off a borrowing spree, with no backstop of purchases from the ECB this time around.

“There will be a lot more supply and no natural buyer like you had in the past and that’s going to cause a lot of uncertainty about who will buy the BTPs,” said Flavio Carpenzano, investment director at Capital Group, which has assets under management in excess of $2 trillion. He holds an underweight position in Italian bonds. “It’s demand and supply dynamics.”

Investor focus will be on euro-area and German inflation figures for November, which are forecast to slow or hold steady. For the UK’s gilts, Bank of England data on foreign purchases in October may garner some attention.

--With assistance from Chiara Albanese and Sujata Rao.