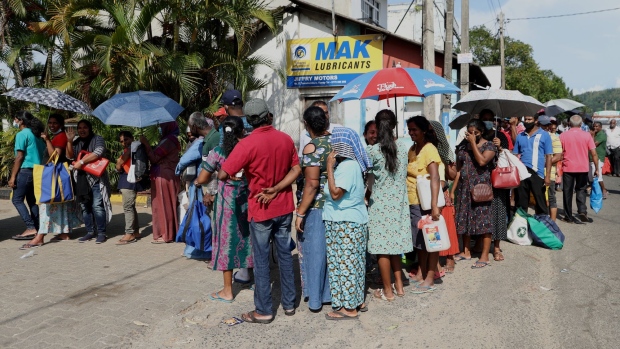 People wait in line to buy kerosene at a gas station in Kandy, Sri Lanka, on June 13. , Bloomberg

As the US, UK and other wealthy nations grouse about the prospect of stagflation and risk of recession, people in some emerging nations are facing more perilous questions about how to find medicine to stay alive. A financial crisis gripping Sri Lanka’s 23 million people threatens to spread across the developing world and sweep up hundreds of millions more.

This week on “Stephanomics,” we explore profoundly different economic climates. The first are emerging markets exemplified by Sri Lanka and burdened with pandemic-related debt, double-digit inflation and food shortages; the second is Qatar, an already rich petro-state that’s getting richer thanks to a global energy crisis. Reporter Sudhi Ranjan Sen surveys the chaos in Colombo, where protesters angry with 40% inflation and days-long waits for fuel and cooking gas are demanding the ouster of President Gotabaya Rajapaksa. In the words of one Sri Lankan woman who was unable to find pharmaceuticals for her parents: “It’s really hard to see somebody die without medicine, because you have the money, you don’t have a place to buy the medicine.”

For the wider world, the risk is that Sri Lanka’s financial crisis spreads to other developing nations that also face high debt levels, rising interest rates and weakening currencies. Ziad Daoud, Bloomberg's chief emerging markets economist, counts five countries most at risk of following in Sri Lanka’s footsteps: Tunisia, El Salvador, Ghana, Ethiopia and Pakistan. Lenders to Sri Lanka stand to lose half of their investment, Daoud tells host Stephanie Flanders, but it’s unclear how the island nation will treat its debts to China. In the past, China has been unwilling to join multilateral agreements to write down debt. But what happens if other lenders forgive much of Sri Lanka’s debt, while the nation makes good on what it owes China?

Finally, correspondent Simone Foxman relays the remarkable turn of events in Qatar, which this week hosted the Qatar Economic Forum. Until very recently, analysts questioned the wisdom of Qatar’s plan to boost its liquefied natural gas exports by 60%, at a cost of $30 billion. Where analysts figured Qatar was overestimating demand, Russia’s war on Ukraine has European nations lining up for Qatari energy. Meantime, the Persian Gulf nation is readying its stadiums ahead of the 2022 World Cup in Doha, set for November and December. By one estimate, the nation has pumped $350 billion into badly needed infrastructure and other improvements ahead of the games.