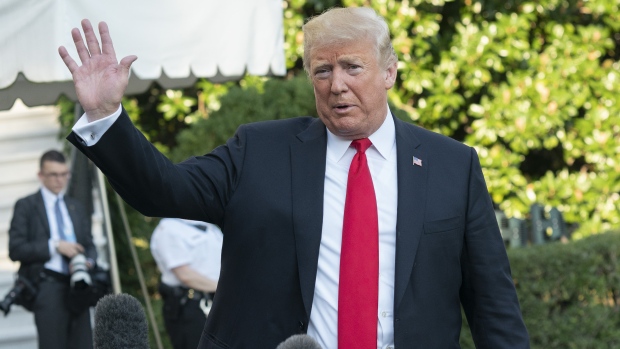 U.S. President Donald Trump waves after speaking to members of the media before boarding Marine One on the South Lawn of the White House in Washington, D.C., U.S., on Saturday, Sept. 29, 2018.

The threats were growing graver and the prospects for a new NAFTA deal looked dark. But then each side blinked.

The trade accord between the U.S. and Canada that came together Sunday night emerged from a frenzied, 72-hour push that capped 13 months of glacial negotiations, according to U.S. and Canadian officials and other people familiar with the talks. And it happened as President Donald Trump weighed new tariffs after snubbing Canadian Prime Minister Justin Trudeau at the United Nations.

The chill between the two leaders at the UN General Assembly left talks stalled, just days before a key deadline. Then, for the first time in a year, each side made a major concession: The Canadians committed to reducing dairy tariffs, and the U.S. gave in on protections for Canadian broadcasters and other red lines Trudeau had drawn, the people said.

Jared Kushner, the president’s aide and son-in-law, played a crucial role in smoothing talks while Mexican officials worked from the sidelines to nudge their partners along.

The deal stabilizes the continental US$1 trillion trading zone, replacing 1994’s NAFTA with the re-branded U.S. Mexico Canada Agreement, or USMCA. The changes aren’t revolutionary, but remove a cloud hanging over the Canadian and Mexican economies. Trump can now claim success on a campaign promise to renegotiate NAFTA -- anathema to workers across large swathes of the U.S. -- just in time for November congressional elections.

“A whole combination of things led us to the right place at the right time -- and then you have to have people who can close, and fortunately, we did,” said David MacNaughton, Canada’s ambassador to the U.S., who participated in talks.

But it almost fell apart.

A clash on automobiles was one turning point. Washington demanded that all cars traded under NAFTA contain at least 50 per cent U.S. parts, a strategy intended in part to jar automakers off the sideline and spur their involvement, some of the people said. Then Trump’s team shifted its stance, instead demanding a share of the cars be built at higher wage factories, but not necessarily in the U.S. NAFTA talks, finally, had hope.

“I think that was probably the single pivotal moment,” Freeland said Monday. “And I think from then on, we felt that the outline of a deal was there.”

Fits and starts continued. What Canada saw as a “deal-making moment” in the spring passed when the U.S. insisted on a sunset clause for the new accord, a demand it later dropped. The U.S. bristled at Canadian inflexibility. Then came the Group of Seven Summit in June and an explosive rift between Trump and Trudeau. Suddenly, Canada was Trump’s NAFTA target.

U.S. Trade Representative Robert Lighthizer and Kushner briefed the president often at the White House residence, and Trump urged the pair to take their time. The president decided on a strategy -- split the Mexicans and Canadians. Mexico-U.S. talks in the summer yielded a deal, setting up a final confrontation between the U.S. and Canada, the people said.

Most of the people interviewed for this account of the talks asked not to be identified in order to candidly describe the negotiations.

Another turning point came in early September -- not in Ottawa or Washington, but in Edmonton, where Trudeau spoke to a local radio station. He publicly insisted on maintaining cultural exemptions protecting Canadian media and arbitration panels with the authority to impose settlements on trade disputes. Only then did Canadian negotiators in the room feel their demands were taken seriously, and the tone changed, one Canadian government official said.

U.S. officials had held off giving in on either issue as they tried to squeeze further dairy concessions from Canada.

In the highly technical talks between the U.S. and Canada, Kushner cultivated close ties with two of Trudeau’s top aides, Katie Telford and Gerald Butts. Luis Videgaray, the outgoing Mexican foreign minister, delayed a weekend trip to Spain to help Telford and Kushner broker a deal, one person familiar with talks said. Kushner deserves credit for his role in the talks, several people said.

The Mexicans weren’t surprised by Canada’s deadline push -- they’d always expected Canada would hold out for a deal until the last possible second, as the nation did during the Trans-Pacific Partnership negotiations, according to a person familiar with Mexico’s strategy. Talks continued in mid-September; Freeland wore a t-shirt on her flight to Washington, a Christmas gift from her three children, reading: “Keep calm and negotiate NAFTA.”

Then came the UN General Assembly last week. Trudeau approached Trump and got only a cool, brief handshake. Mexican Economy Minister Ildefonso Guajardo spoke with Freeland on the sidelines of the summit for 90 minutes to offer advice based on his experience negotiating with Lighthizer.

At a UN press conference, Trump took aim at Trudeau. He said he avoided meeting the Canadian leader and that he didn’t like Canada’s “representative” -- Freeland, it’s widely assumed. Each jab sapped away bits of Trudeau’s political wiggle room to make a deal with Trump, who is unpopular in Canada. Trump again threatened auto tariffs on Canada, calling it the “mother lode.” Things looked dark.

That Thursday, after Trudeau convened a cabinet meeting, the Canadians made another proposal, showing movement on dairy. Lighthizer didn’t like it -- it wasn’t enough to take to Trump, the people said. But it showed flexibility. Lighthizer and Kushner came back to the Canadians on Friday. It was considered to be one last shot by the Americans.

Lighthizer’s firm opposition to the arbitration panels was largely a bluff. He quickly agreed to maintain them once the dairy deal was in place, people said. Only then did the Canadians think, for the first time in a year, a deal was close. That night, the U.S. and Mexico delayed plans to publish text of the reworked deal they reached without Canada.

“That really indicated to us that they wanted to get it done too,” MacNaughton said.

The countries set aside one stumbling block, steel and aluminum tariffs, leaving a resolution for later. The U.S. duties remain a major irritant, and both Mexico and Canada continue to impose retaliatory tariffs on the U.S.

As talks ramped up, Freeland canceled a Saturday UN speech. The deal really only formed on Sunday morning and was finished that night, the people said.

“There wasn’t a single ah-ha moment,” Trudeau said. “There was just a series of okay, we got this one settled.”

Trudeau called a cabinet meeting for 10 p.m. Sunday night, as reporters huddled outside. The cabinet would need to sign off, and Canadian officials remained nervous -- with Trump, anything can happen, and they didn’t think the deal would be done until it was published. The accord was announced that night, minutes before a midnight deadline.

Trump offered modest praise for Trudeau in comments on Monday. Trudeau and Freeland, in turn, praised Lighthizer at length -- and barely mentioned the U.S. president.