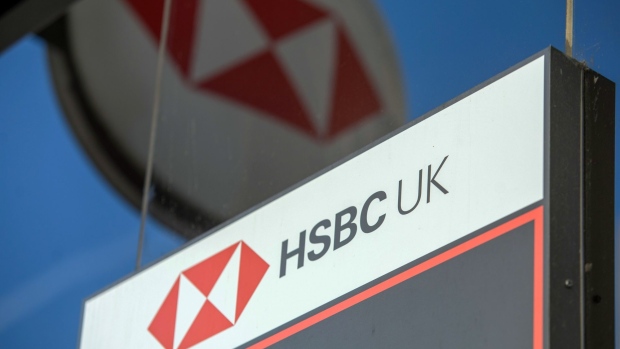 A sign above an HSBC Holdings Plc bank branch in Woking, U.K., on Friday, Feb. 12, 2021. The U.K. economy grew at double the pace expected in the fourth quarter, showing signs of resilience to coronavirus restrictions at the end of a year that delivered the worst recession since 1709. Photographer: Chris Ratcliffe/Bloomberg , Bloomberg

(Bloomberg) -- HSBC Holdings Plc has announced plans to shutter more than 100 of its UK branches next year as the bank pushes more of its customers to use its online services.

The London-headquartered lender said it would begin the closure of 114 sites from April, cutting its branch network by about a quarter, according to a statement Wednesday. The bank will have 327-strong branch network at the end of the process to serve its 14.9 million UK customers.

Closing the branches comes as the number of regular customers visiting a physical store has fallen 65% in the past five years, the bank said. In the majority of the branches being closed, the bank said that usage had halved, something that has accelerated since the Covid-19 pandemic.

Other lenders are also cutting their physical footprints, raising fears among regulators about adequate access to banking services. To mitigate that some HSBC customers deemed vulnerable are being offered free Samsung tablets to help them access HSBC’s online services, as well as being provided with personal training in their use.

Jackie Uhi, managing director of UK distribution at HSBC UK, said that remote banking had become the norm for most customers. “People are changing the way they bank and footfall in many branches is at an all-time low, with no signs of it returning,” she said in a statement.