China’s biggest tech company by sales has been stockpiling chips to get its signature device out in time to compete with Apple Inc.’s iPhone 12 over the holidays. Huawei will have to overhaul its smartphone lineup after Trump administration sanctions that took effect in September curtailed its ability to design and manufacture advanced in-house chips by cutting it off from the likes of Taiwan Semiconductor Manufacturing Co.

The company’s consumer devices group, led by Richard Yu, was already prevented from shipping handsets with the full Google-augmented Android experience. But that didn’t stop it from surpassing Samsung Electronics Co. to become the world’s best-selling smartphone maker in the summer, largely on the strength of growing domestic sales. Without a contractor to produce its own chips or the ability to buy processors from a supplier like Qualcomm Inc., prognostications for the division’s future are less rosy. 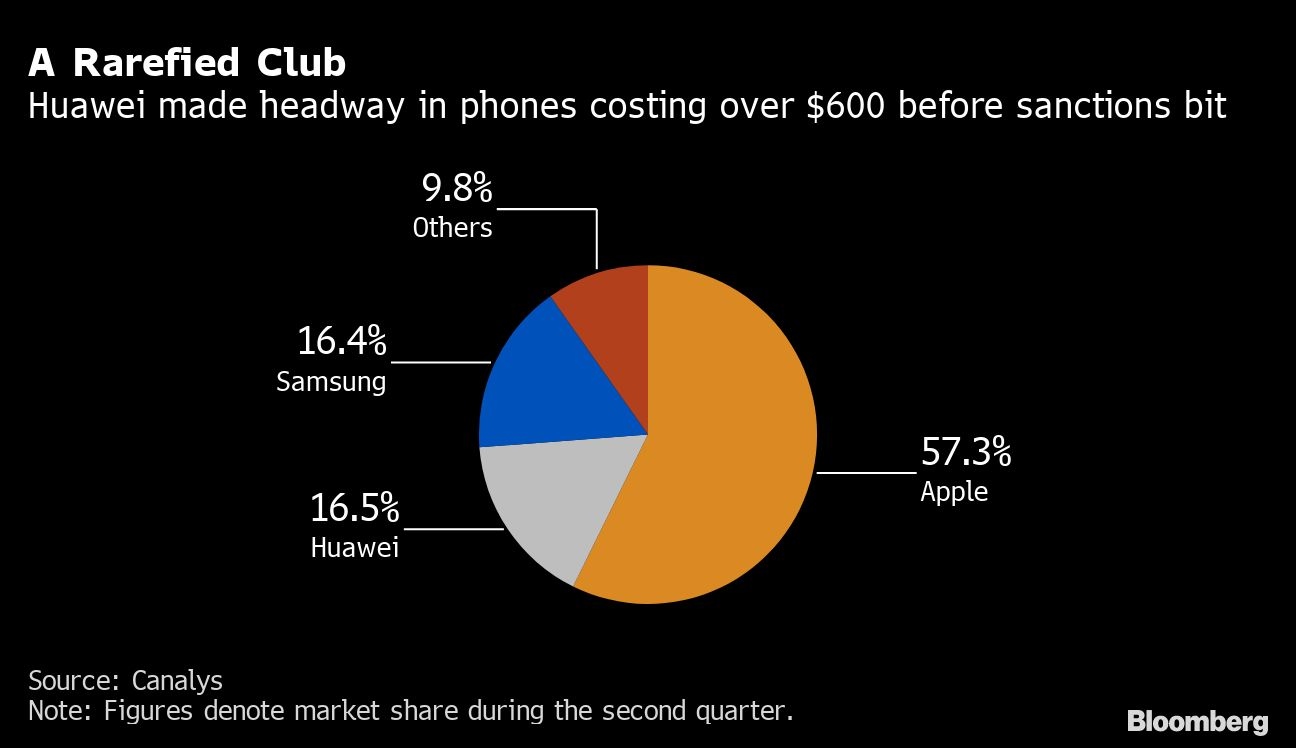 “We are suffering from the U.S. government’s third-round ban. This unfair ban,” said Yu during a live-streamed presentation, saying the trade sanctions make things extremely difficult. Though he did open the event by saying that, “at Huawei, we continue to dare to dream for a bright future together.”

The 6.5-inch Mate 40 and 6.76-inch Mate 40 Pro feature the 5nm Kirin 9000 processor, second to Apple’s A14 chip to offer that advanced manufacturing node in consumer devices. The system-on-chip contains 15.3 billion transistors, including eight CPU cores maxing out at a speed of 3.13GHz and 24 GPU cores that Huawei claims give it 52% faster graphics than Qualcomm’s best offering.

Both devices have sloping glass sides and in-display fingerprint sensors. The new rear “Space Ring” design accommodating Huawei’s multi-camera system is reminiscent of the control wheel of iPods of yesteryear. It plays host to a 50-megapixel main camera accompanied by zoom and ultrawide lenses.

Though prevented from doing business with technological partners and suppliers, Huawei still touts Leica co-branding on its imaging hardware and is once again offering a Porsche Design edition of its new flagship smartphone. The company also announced a new pair of over-ear headphones and new home speakers in collaboration with French audio brand Devialet SA.

Huawei is the leader in China, where the mobile software ecosystem is fleshed out with vendor-specific apps and stores alongside a reliance on Tencent Holdings Ltd.’s WeChat super-app as a mini operating system. The Mate 40 gives Huawei a response to Apple’s new 5G-enabled iPhones and extends the period of time before it has to completely rethink its consumer devices strategy.