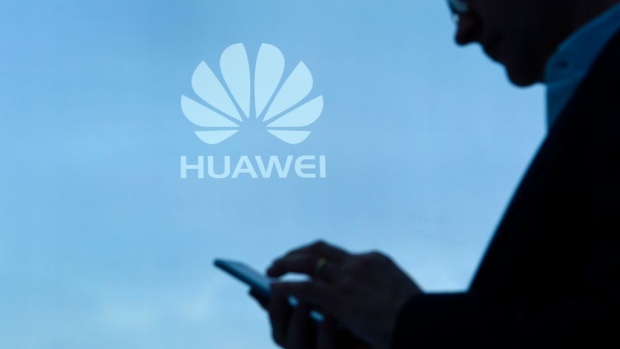 A visitor uses his mobile phone at the Huawei stand on the second day of the Mobile World Congress on February 28, 2017 in Barcelona. , Photographer: Lluis Gene/AFP/Getty Images

China’s largest technology company reported revenue of 610.8 billion yuan (US$86.1 billion) in the January to September period. Global smartphone shipments jumped 26 per cent in the first three quarters to over 185 million units, helping safeguard its position as the world’s second largest name in mobile devices.

China’s largest technology company managed to grow revenue despite curbs on the export of crucial American software and components, which executives had warned for months would severely crimp both its networking and smartphone businesses. Huawei has said it expects U.S. export restrictions to reduce annual revenue at its consumer devices business by about US$10 billion, in part because Google can no longer supply Android updates and apps from Gmail to Maps for the Chinese company’s newest handsets.

The company’s reported results -- which were unaudited -- suggest that those restrictions have yet to severely impair the business. Huawei, accused by Donald Trump’s administration of aiding Beijing in spying while spearheading China’s tech-superpower ambitions, is trying to claw back business and shore up trust in its products.

Billionaire founder Ren Zhengfei has warned his tech empire faces a “live or die moment,” and mobilized thousands of staff to work around the clock devising alternatives to American technology. Some American giants, including Intel Corp. and Micron Technologies Inc., have said they’re found ways to resume supplying Huawei, a major boost for the Chinese company.

Its phone shipments in 2019 suggest its lead in the Chinese market, the world’s largest, is offsetting weak sales abroad. Huawei shipped more than 206 million smartphones in 2018, according to research firm IDC. The company is betting on its home turf and upcoming holiday season to drive its smartphone sales for the rest of the year. It aims to take half of the smartphone market in China, Bloomberg News reported earlier.

There are signs also that U.S. efforts to block Huawei from the development of 5G technology are flagging: Huawei said Wednesday it has signed more than 60 5G commercial contracts to date worldwide. A senior executive in India for the company said the government there had given “no negative feedback” on Huawei, while in Germany, one of the biggest European markets, the Merkel administration said Huawei’s equipment will not be excluded in future 5G procurement. Huawei’s biggest bet, however, remains in China, where state-owned carriers are ready to build their own 5G networks.

It remains unclear whether prolonged sanctions will eventually rob Huawei of growth, something Ren himself has warned may happen. Huawei remains at the heart of U.S. tensions with China, a symbol of the Asian country’s rising technological might.

Critics charge that intellectual property theft from the likes of Cisco Systems Inc. and Motorola Solutions Inc. helped Huawei vault into the upper echelons of telecommunications providers, though Ren and his executives credit years of investment and research. The wireless giant is now accelerating spending on artificial intelligence chips and mobile software. It’s mobilizing its employees to source or develop alternatives to American circuitry and software to keep its edge in smartphones and next-generation 5G wireless technology.