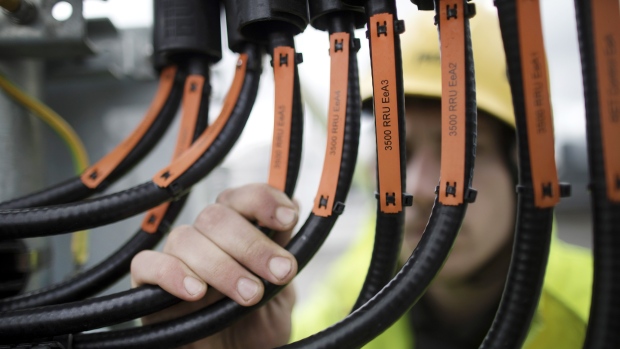 An engineer from EE the wireless network provider, owned by BT Group Plc, checks cabling on Huawei Technologies Co. 5G equipment undergoing trials in the City of London, U.K., on Friday, March 15, 2019. Europe would fall behind the U.S. and China in the race to install the next generation of wireless networks if governments ban Chinese equipment supplier Huawei Technologies Co. over security fears, according to an internal assessment by Deutsche Telekom AG. , Bloomberg

(Bloomberg) -- Huawei Technologies Co. poses too big of a threat to Canada and should be banned from its 5G network, according to the vice chairman of Rogers Communications Inc.

While Huawei is cheaper and sophisticated compared with other alternatives, its close relationship to the Chinese government is troubling, Philip Lind said. The company would be obliged to do the government’s bidding, he said.

“The idea of Huawei controlling, or potentially controlling our communication system in Canada is crazy,” Lind said in a TV interview with BNN Bloomberg. “I don’t think they should be allowed to.”

The Canadian government is still mulling whether to ban Huawei from its 5G telecommunications system due to potential security challenges. No deadline has been made on the ruling though its Five Eyes intelligence allies remain divided on the issue.

Canada, the U.K. and New Zealand are still deciding what to do about Huawei while Australia has banned the firm from 5G. In the U.S., President Donald Trump is moving to restrict Huawei from doing business with American companies.

Huawei has repeatedly stated it’s an independent company and that its technologies are secure. Executives have invited doubting parties to inspect their network and codes.

For Lind, the facts surrounding Huawei’s threat to Canada’s communications are “pretty evident.” He referred to the arrest of the firm’s Chief Financial Officer Meng Wanzhou in Vancouver last year, saying that the Chinese government’s deep interest in her release shows how close they are to the firm.

Company analysts have predicted that a ban on Huawei from 5G core networks is likely, adding that it would pose little or no threat to existing carriers’ short-term spending plans. Rogers does not have Huawei in its 5G equipment, partnering with Ericsson AB instead.

Rogers competitors Telus Corp. and BCE Inc. do use Huawei equipment though have not yet selected their 5G vendors. Telus came out in defense of Huawei earlier this year, saying that the Chinese equipment maker has been good for Canada and a ban could potentially add to 5G costs and delay its roll-out.

To contact the reporter on this story: Natalie Wong in Toronto at nwong133@bloomberg.net