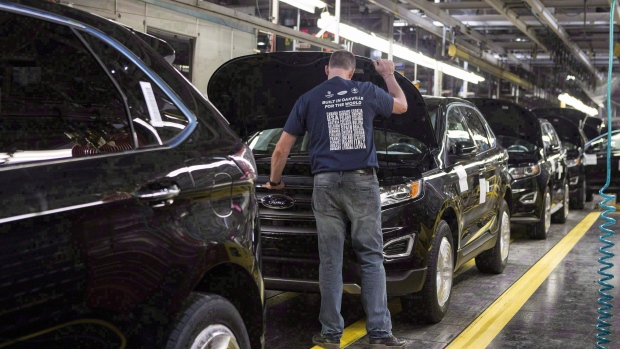 New Ford Edges sit on a production line as Ford Motor Company celebrates the global production start of the 2015 Ford Edge at the Ford Assembly Plant in Oakville, Ont., on Thursday, February 26, 2015. , The Canadian Press

Ford Motor Co. said Monday it will lay off approximately 450 workers at its Oakville, Ont. assembly plant in early 2020 as the company ends production of some of its vehicle models.

A spokeswoman for the automaker confirmed it is ending production of Ford Flex and Lincoln MKT as it “strengthens its focus on products in the heart of the fastest growing segments to meet shifting consumer demands.”

As a result, Ford said it will adjust its production levels at its Oakville plant, which employs about 4,600 people.

This is the second round of job cuts the company has announced this year for that location, which opened in 1953. In July, the automaker said it would cut nearly 200 jobs in Oakville starting in September as sales of some models slowed.

Ford said it is in the process of replacing 75 per cent of its vehicle lineup, which will include an expansion of its truck and utility vehicles, and more electric vehicle offerings.