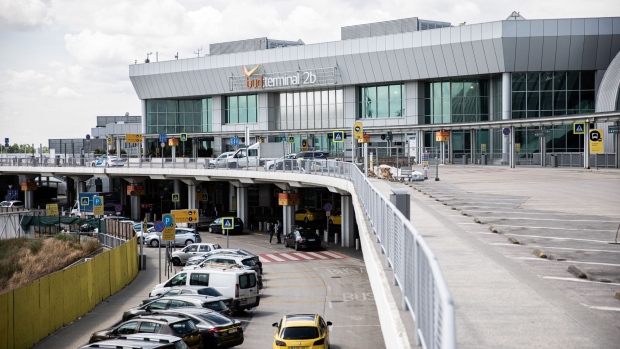 Automobiles arrive at the departures terminal at Liszt Ferenc airport in Budapest, Hungary, on Monday, May 25, 2020. Wizz Air is plotting a major expansion at London Gatwick airport as rival carriers pull back, paving the way for the Hungarian low-cost carrier to emerge from the travel downturn with a bigger presence in the world’s busiest city for passenger traffic. , Bloomberg

(Bloomberg) -- The operator of Budapest airport has raised concerns with the European Union about what it characterizes as undue pressure from Hungary’s government, just as Prime Minister Viktor Orban is applying for billions of euros in pandemic-recovery funds.

Orban is visiting Brussels on Friday for talks with European Commission President Ursula von der Leyen on a broader ranger of issues. In the runup to that meeting, the commission has been briefed on concerns by AviAlliance, a German-based airport management company which is also the biggest shareholder in the hub, according to people familiar with the matter who asked not to be identified as the discussions are private. Singapore sovereign-wealth fund GIC and a Canadian fund hold minority stakes.

AviAlliance told the commission that the shareholders have faced pressure to sell the airport to entities and individuals close to the Hungarian government and the situation has worsened since they rejected an offer last year, one of the people said.

They cited a block on 50 million euros ($60 million) of virus-related assistance from the London-based European Bank for Reconstruction and Development, the person said. Recent years have seen unsubstantiated accusations about the airport’s investments, obstruction in developing the facility and threats from ministers and government-friendly media, the person added. Hungary’s government sold its remaining stake in the hub in 2011.

While the airport owners didn’t make a specific request of the commission, they are flagging up their issues at a moment when von der Leyen has an opportunity to force Orban to respect the rule of law, including investors’ rights.

After years of criticizing Orban’s government for violating the EU’s democratic norms, the 800 billion-euro recovery fund gives the commission much more leverage to bring Hungary into line. The country is set to receive more than 7 billion euros in grants from the fund -- but only if von der Leyen is satisfied by its adherence to the rule of law. Facing elections next year, Orban is keen to access as much economic aid as possible.

“I don’t want to negotiate anything because we’ve settled most financial questions,” Orban said Friday on Hungarian state radio. “I’m more interested in questions related to the future of the EU.”

Asked to comment directly on the airport operators’ concerns, a spokesman for Orban said he had nothing to add to the prime minister’s remarks. Spokesmen for von der Leyen and AviAlliance declined to comment, as did a press officer at the Canadian retirement fund Caisse de Depot et Placement du Quebec. A spokesman at GIC in Singapore didn’t respond to an email and a call.

Hungary offered an olive branch to the EU on Wednesday by moving to tweak legislation that underpinned attacks against foreign-funded universities and civil-society groups. But it also drew criticism from the Dutch government on the investment climate this month by blocking the sale of a Dutch insurer to an Austrian group.

Friday’s agenda won’t be limited to the recovery-fund plans, one of the people said. Hungary recently sought to create corporate national champions, including in the financial industry, while further tightening its grip on the media.