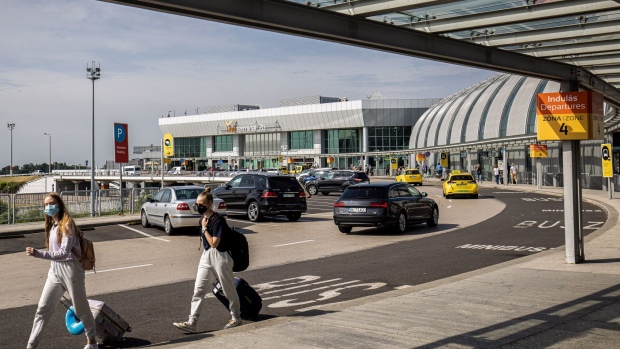 Vehicles drop off passengers outside Budapest Ferenc Liszt International Airport in Budapest, Hungary, on Wednesday, Aug. 4, 2021. The Hungarian government has made a non-binding offer to buy Budapest Airport, according to people familiar with the matter, as Prime Minister Viktor Orban seeks to gain control of what had been one of the fastest growing hubs in the region before the coronavirus pandemic. , Bloomberg

(Bloomberg) -- A consortium led by Hungary’s government has offered about 4 billion euros ($4.6 billion) for full control of Budapest Airport, according to people familiar with the negotiations.

The latest bid, after an earlier one this year was rejected as undervaluing the hub, is being considered by the airport’s owners, according to two people who asked not to be identified as the information isn’t public.

Although a final decision has yet to be taken, the owners will probably be inclined to sell at that price and a deal may be concluded before general elections, likely to take place in April, according to one of the people.

Budapest Airport operator AviAlliance, a Germany-based airport management company which is also the biggest shareholder, declined to comment, as did Hungary’s Innovation and Technology Ministry, which is leading negotiations for the government.

Prime Minister Viktor Orban has sought to reduce foreign ownership in an increasing number of industries he considers strategic, and he has said the airport is key for tourism and broader economic development.

Orban is under the gun to close the deal before parliamentary elections, with his ruling party and the united opposition neck and neck in polls ahead of the most closely fought general ballot in more than a decade. The opposition has threatened to scrap several major business deals Orban has championed.

Hungary sold more than $5 billion in international bonds last month, widening its fiscal maneuvering room at a time when the European Union’s executive is withholding billions of dollars in pandemic aid over graft concerns.

The airport’s owners have been informed that partially state-owned refiner Mol Nyrt, and Daniel Jellinek, the owner of local real estate developer Indotek, which had business deals with Orban’s family, are part of the consortium. Bloomberg first reported a year ago that a consortium including Mol and Jellinek had approached the airport with an ultimately unsuccessful unsolicited offer.

Bloomberg previously reported that among the terms and conditions the hub’s owners are seeking from the government is to know the identity of the other members of the consortium and whether the group has the financial capability and technical expertise to acquire and run the airport.

The Hungarian government has yet to provide that information, one of the people said. Orban’s government has indicated that it wants to conclude an agreement by the end of the year, the person said.

Budapest Airport’s owner until recently ruled out selling the lucrative hub but they’ve also expressed concerns about potential state retaliation if they didn’t agree to part with their stake.

Last year, Budapest Airport reported Ebitda of 38 million euros ($44 million) and a full-year loss of 110 million euros after a collapse in travel. The airport expects operations to return to pre-Covid levels by 2023.

The hub’s privatization started in 2005 and the Hungarian government sold its remaining stake in 2011, a year after Orban returned to power. The concession agreement lasts until 2080.