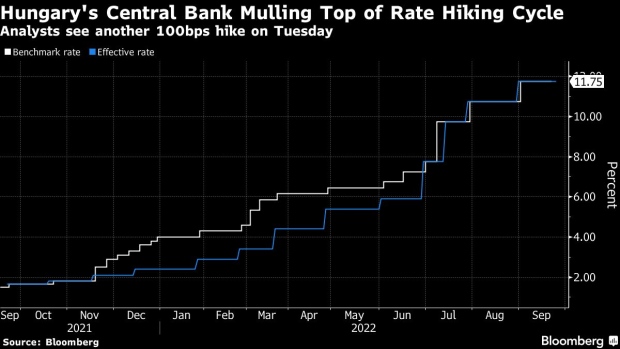 A cleaner sweeps the floor inside the Grand Market Hall in Budapest, Hungary on Thursday, Aug. 26, 2021. Hungary’s economy shot higher by a record amount in the second quarter as the economy rebounded from its worst-ever three-month contraction during the height of the pandemic. , Bloomberg

(Bloomberg) -- Hungary will raise its key interest rate to a new European Union high as a standoff with the bloc over the rule of law complicates the central bank’s efforts to end its monetary-tightening cycle.

Policy makers will raise the benchmark interest rate by a full percentage point to 12.75%, according to 8 out of 12 analysts in a Bloomberg survey. The decision -- along with new quarterly economic forecasts -- will be announced at 2 p.m., after which central bank Deputy Governor Barnabas Virag is expected to speak at 3 p.m.

Hungary is scrambling to unfreeze recovery funds that the EU’s executive commission is refusing to release over corruption concerns as the country faces a spike in energy prices and the highest inflation since 1998. Those issues have hammered the forint and undercut the central bank’s plan to slow or stop rate hikes that have eclipsed tightening everywhere else in the EU.

“We’ll assess each month from September onwards whether rate hikes should be stopped,” Virag said last Thursday. The pace of tightening for Tuesday’s meeting may repeat the full-point hike made in August or slow to 50 or 75 basis points, he said, adding that the end of tightening may happen in one step or gradually.

Central banks elsewhere in the EU’s eastern wing have signaled they’re ready to end monetary tightening as they balance the need to rein in inflation with that of preventing the energy crisis from stifling economic growth.

But Hungary’s forint is near an all-time low against the euro and, having fallen 9.7% this year, it’s the worst-performing among the 23 emerging-market currencies tracked by Bloomberg aside from the Argentinian peso and the Turkish lira.

That has made stopping or reversing the tightening cycle more difficult. Investors are demanding a higher rate-premium on Hungarian assets because of the country’s heavy reliance on energy imports, a spurt in government spending before last year’s elections and the dispute with the EU over 7.5 billion euros ($7.2 billion) in recovery funds.

Those concerns only deepened on Monday when Prime Minister Viktor Orban announced Hungary is in talks with “international partners” to ensure it has sufficient financing for energy investments during the country’s gas crisis. The forint plunged 1% against the euro after his speech.