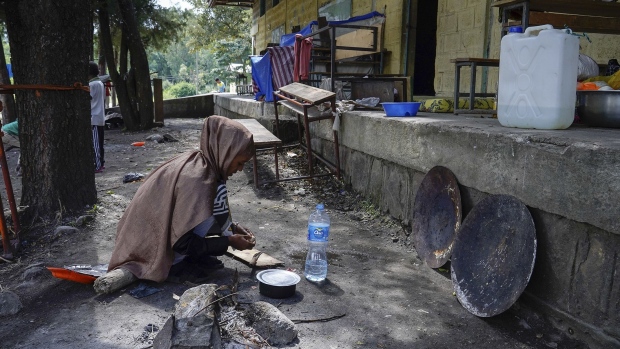 KOMBOLCHA, ETHIOPIA - OCTOBER 15: A woman cooks outside of one of the blocks of housing designated for women and children at the Yegoff Primary School on October 15, 2021 in Kombolcha, Ethiopia. Female IDP's who are nursing or expecting sleep in separate quarters at most IDP camps. The Yegoff Primary School is currently the home to 703 IDP's from the Habru Woreda, Guba Lafto, Kobo and Lasta. Food shortages, lack of clothing and proper bedding are among some of the major challenges that face IDP's at the camp. The almost yearlong conflict in the Tigray region, whose southern border is about 180km to the north, has spread to neighboring Amhara after the TPLF recaptured most of its home state from government forces in June and then invaded the Amhara and Afar regions in July of 2021. (Photo by Jemal Countess/Getty Images) , Photographer: Jemal Countess/Getty Images Europe

(Bloomberg) -- Almost 40% of the 6 million people living in Ethiopia’s northern Tigray region, the epicenter of a protracted civil war, are facing extreme food shortages, a new assessment by the World Food Programme has found.

About 83% of the population are food insecure and not a single aid convoy has reached the region since mid-December, the United Nations agency said in a report released on Friday. Fighting between federal forces and troops loyal to the Tigray People’s Liberation Front, which was the country’s preeminent power broker for almost three decades, has dragged on for 14 months despite multiple mediation efforts to end it.

“Families are exhausting all means to feed themselves, with three-quarters of the population using extreme coping strategies to survive,” the WFP said. It also found the number of people going hungry in Amhara, which borders on Tigray and has also seen heavy fighting, more than doubled in the past five months and over 14% of children there under the age of five are malnourished.

The release of the assessment, which was carried out over the past two months, came amid reports of fresh fighting in Afar, another northern region.

READ: How Ethiopia’s Rift With Tigray Rebels Has Deepened: QuickTake

The government blamed rebel Tigrayans for staging renewed attacks and disrupting aid deliveries. “This indicates that the terrorist group is still trying to use hunger as a political tool,” the Ministry of Foreign Affairs said in a statement on Friday.

Getachew Reda, a TPLF spokesman, couldn’t immediately be reached for comment. He said earlier this week on Twitter that renewed fighting was started by regional forces from Afar and Eritrea and called for “desperately needed humanitarian aid” to enter Tigray.

Thousands of people have died in the war and millions more have been displaced. Most healthcare facilities in Tigray ran out of key supplies months ago, with health-care workers lacking antibiotics and other drugs, proper clothing and cleaning materials, according to aid workers.

While federal forces have regained territory lost in early November, they have so far refrained from moving into Tigray, but used drone attacks that have killed large numbers of civilians. The TPLF leadership says it has made a strategic retreat into Tigray and is willing to enter into peace talks.

The European Union is backing so-far unsuccessful efforts by the African Union’s envoy, former Nigerian President Olusegun Obasanjo, to bring the sides back to the negotiating table. Kenyan President Uhuru Kenyatta and Workneh Gebeyehu, the executive secretary of the Intergovernmental Authority of Development, have also been trying to broker a ceasefire.

The multiple mediation efforts are problematic because they aren’t being coordinated and there is a danger that the warring sides could resort to “forum shopping,” said Cameron Hudson, senior fellow at the Atlantic Council’s Africa Center.

“I do worry that at some point we might need a mediator for the mediators,” he said.