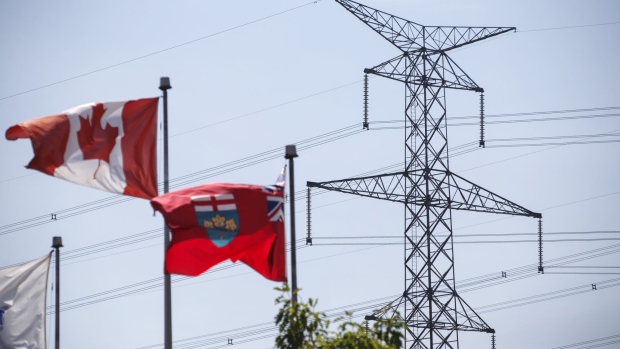 Canadian and Ontario flags fly in front of a Hydro One Ltd. transmission tower in Toronto, Ontario, Canada, on Thursday, July 12, 2018. , Bloomberg

More than 490,000 Hydro One Ltd. customers had experienced outages caused by what the utility called “one of the worst wind storms in recent years” cutting through Ontario. Crews are using helicopters and off-road equipment to make repairs and find damage, which so far includes 250 broken poles and nearly 60 damaged transformers across the province.

“Due to the severity of the damage, Hydro One crews from areas not affected by the storm are assisting with restoration efforts and we anticipate some customers could be without power beyond Monday,” Hydro One said in its latest update.

The province is home to Canada’s largest city, Toronto, and a number of critical oil refineries, chemical plants and pipelines. Emails to Ontario refinery operators including Imperial Oil Ltd., Royal Dutch Shell Plc as well as pipeline operator Enbridge Inc. weren’t immediately returned. Suncor Energy Inc. operator of a refinery in Sarnia, Ontario, declined to comment on the status of its plant when contacted by email.

The winds also caused power outages to about 400,000 customers in neighboring Quebec, Hydro-Quebec said in a statement. About 33,000 customers were still without power as of 11 a.m. Monday, the Montreal-based utility said on its website.

(Updates with latest outage numbers for Hydro One and Hydro-Quebec)