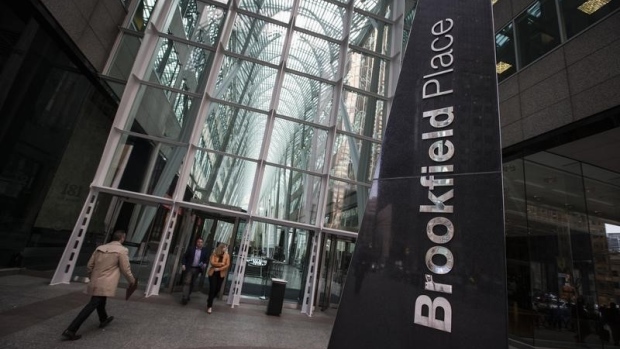 People walk to Brookfield Place off Bay Street on the day of the annual general meeting for Brookfield Asset Management shareholders in Toronto, May 7, 2014. , REUTERS/Mark Blinch

Spanish utility Iberdrola SA and Brookfield Asset Management Inc. are among those considering bids for energy group PPL Corp.’s U.K. business, which could be valued at about 12 billion pounds (US$15.6 billion), according to people familiar with the matter.

Australia’s Macquarie Group Ltd., U.K.-based Dalmore Capital and Ontario Teachers’ Pension Plan are also considering offers for the Western Power Distribution unit of the U.S. utility, the people said, asking not to be identified as the matter is private.

PPL is also reaching out to the U.K.’s National Grid Plc and other utilities to gauge their interest in bidding, the people said. Other suitors could emerge, and some bidders may team up later in the process given the size of the transaction, the people said. PPL plans to ask for first-round bids next month, according to the people.

Utilities with a presence in the U.S. could offer to swap their assets in the country for PPL’s U.K. operations in any deal, the people said. Iberdrola, which operates in Britain through its Scottish Power unit, has a large U.S. presence. National Grid also has electricity networks serving 3.4 million customers in the U.S.

No final decisions have been made and deliberations are in the early stages, the people said. Representatives for Brookfield, Dalmore Capital, Iberdrola, Macquarie, Ontario Teachers’ Pension Plan, National Grid and PPL declined to comment.

A potential sale of the Western Power unit would put it among the largest utility transactions in the U.K. in the past 20 years, according to data compiled by Bloomberg. It would also be one of the top 5 deals announced in Europe in 2020, the data show.

Infrastructure investors are piling in to assets seen as stable and more predictable amid the coronavirus pandemic. Allentown, Pennsylvania-based PPL said in August that it had launched a process to sell its U.K. utility business, joining a broader push by American power companies that are seeking to focus on their home markets.

Prominent deals in the sector this year include KKR & Co.’s agreement in March to buy the waste-management arm of U.K. utility Pennon Group Plc for 4.2 billion pounds. Elsewhere in Europe, the Portuguese oil company Galp Energia SGPS SA plans to sell its gas-distribution assets for as much as 1.5 billion euros (US$1.8 billion) and, in France, Veolia Environnement SA has offered to buy a 29.9 per cent stake in rival Suez SA from Engie SA.