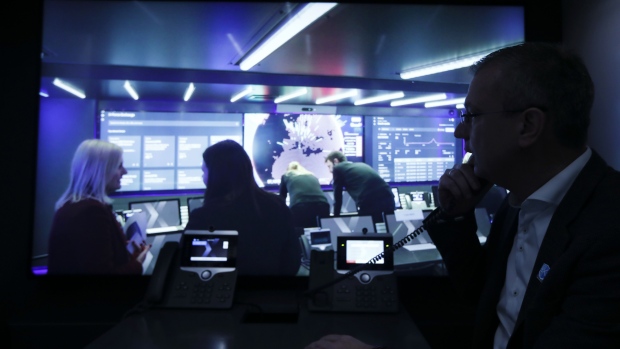 International Business Machines Corp. reported revenue in the fourth quarter that beat analysts’ estimates, breaking a streak of five consecutive declines as its push into the hybrid cloud market slowly starts to bear fruit. The shares jumped in extended trading.

Sales were US$21.8 billion in the quarter, up almost 0.1 per cent from the same period a year earlier, the Armonk, New York-based company said in a statement Tuesday. Wall Street had forecast US$21.6 billion.

The increase stemmed from IBM’s acquisition of Red Hat, which it completed in the third quarter last year, helping boost the cloud and cognitive software division 8.7 per cent from a year earlier. Total cloud revenue was US$6.8 billion, the highest ever.

Chief Executive Officer Ginni Rometty is hanging the company’s future on the market for hybrid cloud, which allows companies to store data in cloud servers on private and multiple public clouds run by its rivals Amazon Web Services and Microsoft Corp.’s Azure. IBM spent $34 billion in 2018 to acquire Red Hat to help kick this strategy into gear. The company plans to use Red Hat to offer enhanced security services and applications in the hybrid cloud.

Red Hat contributed US$1 billion in revenue in the quarter ended Dec. 31, but IBM was only allowed to recognize US$573 million of that due to U.S. accounting standards. IBM reported earnings excluding some costs of US$4.71 a share, beating the average analyst estimate of US$4.69. The company said it expects adjusted earnings per share of at least US$13.35 for 2020, ahead of Wall Street’s projections for US$13.29.

Global Technology Services, which represents about 30 per cent of IBM’s overall revenue, continued to decline. The technology consulting unit had revenue of US$6.9 billion, which is down 4.8 per cent from the same period last year. Global Business Services also declined, to US$4.2 billion -- a 0.6 per cent drop from a year earlier.Once the world leader in technology, IBM has lagged behind rivals for years after largely missing the cloud revolution. “The company has been struggling in a raging bull market for tech stocks,” said Ivan Feinseth, a director of research and analyst at Tigress Financial. “All types of tech companies have been growing expect for IBM.”

IBM has long struggled with revenue growth, a factor that has weighed on shares. The stock rose about 4 per cent in extended trading following the report.