The oil market will suffer a long-lasting blow from the coronavirus, with demand taking years to recover and peaking at a lower level, the International Energy Agency said.

After an unprecedented eight per cent drop this year, global oil consumption will return to pre-crisis levels in 2023, provided COVID-19 is brought under control next year, the Paris-based agency said on Tuesday.

Even in that case, which is the most optimistic scenario for oil considered by the IEA, the pandemic has an enduring impact. The IEA reinforced its view that global oil demand will plateau around 2030, topping out at lower levels than forecast last year.

“The era of global oil demand growth will come to an end in the next decade,” IEA Executive Director Fatih Birol said in the agency’s annual World Energy Outlook.

It’s a stronger tone than last year’s report, which emphasized that there was “no definitive peak” on the horizon. If the recovery from the pandemic is slower and there’s lasting economic damage, oil demand may only have a couple of years left to grow, the IEA said.

The outlook from the agency, which advises most major economies, comes as oil majors like BP Plc and Royal Dutch Shell Plc acknowledge that combination of the pandemic with and the drastic changes required to avert a climate crisis will have profound consequences for their assets and business models.

Long-term growth in oil demand will be tamed by the switch to more efficient or electric vehicles, the IEA forecast. Consumption will increase by about 750,000 barrels a day each year to reach 103.2 million a day in 2030. That’s about 2 million a day less than predicted in last year’s report.

The increase will be entirely concentrated in developing nations -- most notably India -- and dominated by feedstocks for plastics and other petrochemicals, rather than fuel for road transportation. After 2030, annual growth will dwindle to just 100,000 barrels a day. 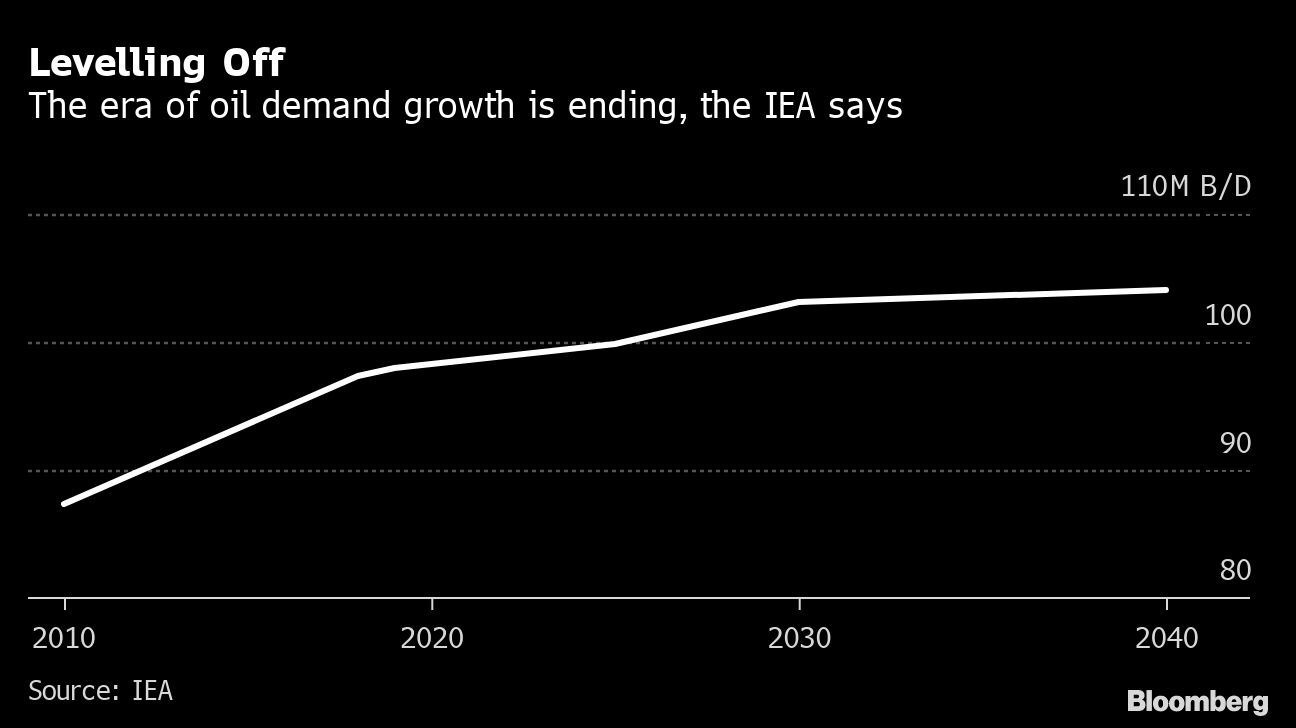 If prolonged coronavirus outbreaks impede the economic recovery, resulting in a global economy that’s 10% smaller in 2030 than current projections, then the outlook for oil is even more bleak.

Oil consumption wouldn’t recover to pre-virus levels until “the latter part of the 2020s” in this scenario, and would plateau shortly afterward at just under 100 million barrels a day, the agency said.

The outlooks from the IEA and international oil companies make the view of the Organization of Petroleum Exporting Countries -- which last week projected that oil demand will continue to grow for another two decades — an outlier.

The cartel also sees oil consumption recovering to pre-pandemic levels in 2022, a year earlier than the IEA.

Even after 2030, about $390 billion of investment will be required each year to find new supplies that offset declining output at aging oilfields, the IEA said.

Prices should recover to US$75 a barrel by the end of the decade, from current levels just above US$40, as demand picks up, encouraging drillers to spend again.

The U.S. shale industry, which provided much of the world’s new oil supplies in the past decade, will rebound to pre-crisis levels in 2022. America is set to remain the largest oil producer all the way through to 2040. However, the shale sector’s failure to reward investors and reliance on debt means “there is a high degree of uncertainty” over its future performance.

“Capital markets are not in the mood to step in and bankroll the next wave of projects,” the agency warned. “It is not clear whether this investment will come in time.”

OPEC members also face a difficult period as depleted revenues strain national budgets, and a chunk of growth that had been anticipated from Nigeria, Iraq and Angola is now expected to be lost.