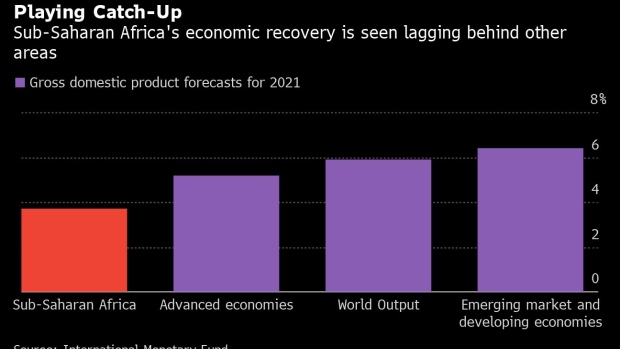 A resident receives a dose of the Pfizer-BioNTech Covid-19 vaccine at the community health center vaccination site in the Khayelitsha township of Cape Town, South Africa, on Wednesday, Sept. 8, 2021. Talks are underway with Johnson & Johnson about running a booster trial in South Africa after the company’s Covid-19 vaccine was used in a mass trial of almost half a million health workers in the country. Photographer: Dwayne Senior/Bloomberg , Bloomberg

Economic growth in sub-Saharan Africa will lag behind world output partly because of the slow rollout of coronavirus vaccines, with more delays to immunization raising chances the disease will become an endemic problem, according to the International Monetary Fund.

The regional economy will probably expand 3.7% this year, after shrinking 1.7% in 2020, when restrictions to curb the spread of Covid-19 weighed on activity and trade, the Washington-based lender said Thursday in its economic outlook for sub-Saharan Africa. The rebound will be slower than advanced economies, with the divergence in growth expected to persist through 2023, Abebe Aemro Selassie, director of the IMF’s Africa department, said in an interview on Oct. 18.

“Instead of catching up and closing the gap in income, what we see is the region falling short of where things were on the eve of the pandemic,” he said. The outlook is reflective of different access to vaccines and “stark differences” in the availability of policy support, the lender said.

Africa is the world’s least-inoculated region, with only 5.23% of its 1.2 billion people fully immunized against the disease, Africa Centres for Disease Control and Prevention data show. The IMF’s baseline outlook assumes that only a few sub-Saharan African countries will achieve widespread vaccine availability before 2023, though demand for booster shots in advanced economies could compromise supply, it said.

“Further delays to the rollout would leave sub-Saharan Africa exposed to new, more virulent strains of the virus, raising the prospect that Covid-19 will ultimately become a permanent, endemic problem across the region -- inevitably weighing on confidence, growth, and the strength of the recovery,” it said.

An internationally endemic disease that leads to an adjustment in behavior by companies and households and affects regional vaccine programs could cost sub-Saharan Africa an additional 1.5% of gross domestic product over the four years from 2022, according to the lender.

Differing prospects for countries across the region also reflect divergent vaccine programs and fiscal and monetary policy support, and show how diversified economic structures muted the impact of the virus and helped some quickly adapt to changes, the lender said. The region’s low-income countries require $245 billion in additional funding over the next five years to secure a robust recovery and regain lost ground -- the corresponding figure for all of sub-Saharan Africa is $425 billion, the IMF said.

While special drawing rights allocated by the IMF to its members in August have boosted the region’s reserves, voluntary channeling of SDRs to countries in need from those with strong external assets can magnify the impact of the new allocations, it said.

Options to re-channel the assets include through the fund’s Poverty Reduction and Growth Trust, which gives interest-free loans, and the creation of a Resilience and Sustainability Trust, which could help low- and vulnerable middle-income countries move toward more climate friendly futures, Selassie said. Talks over a third option, which could see the assets being directed toward prescribed SDR holders such as the World Bank, are in the early stages, he said.