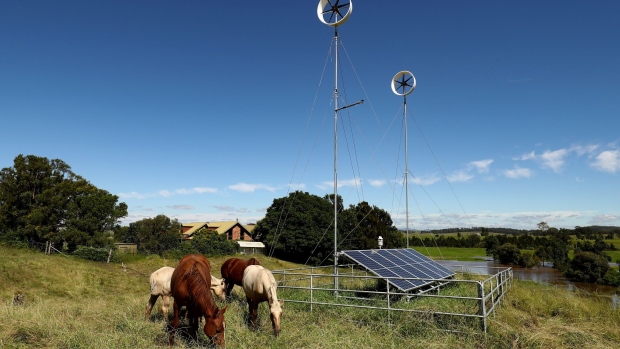 The Diffuse Energy turbines are used with solar panels at the farm. Photographer: Brendon Thorne/Bloomberg , Bloomberg

(Bloomberg) -- High above the treeline on a hillside west of Australia’s Coffs Harbour, a small, white turbine -- about the size of a large standing fan -- is attached to the top of a telecommunications tower.

Less than a meter (3.3 feet) wide and lighter than a pickup truck tire, the equipment can help replace the use of diesel as a power source, and can also be deployed at isolated locations like remote mines or farms.

Even as the largest wind companies build ever-bigger turbines to power a shift away from fossil fuels, startups in Australia and the U.K. also see potential in thinking small.

“There is no silver bullet for solving all of our energy needs for the future, it requires a range of technologies,” said Joss Kesby, co-founder of Newcastle, Australia-based Diffuse Energy, which has miniature systems deployed at locations including about 10 off-grid telecommunications sites. “We see a big part to play for small-scale wind turbines.”

Kesby initially focused on harnessing the technology to power onboard systems of yachts, before recognizing the stronger prospects in a telecoms sector that’s forecast to invest more than $3 billion on distributed energy assets by 2024.

Cellphone towers that can’t connect to a power grid typically rely on solar panels or diesel generators. A small wind turbine can supplement solar generation, or be an alternative power source in areas where there’s limited space or sunlight. The systems can also offer lower costs and far cleaner energy than diesel.

“Off-grid power supply could be a good example of where a small-scale turbine might work,” said Oliver Metcalfe, a London-based analyst at clean energy researcher BloombergNEF. “Given that wind and solar generation profiles are often complementary, pairing the two technologies together can mean output of the overall system is more consistent and reduce the need for back-up diesel generators.”

At London’s vast O2 Arena entertainment complex, Canterbury, U.K.-based Alpha 311 Ltd. is preparing to install 10 of its small, vertical turbines, which will generate almost 88,000 kilowatt-hours of electricity a year, about enough to power 23 homes.

The carbon-fiber and recycled plastic units are about 70 centimeters (28 inches) tall and light enough to be picked up by a small child. Alpha 311 is aiming for the equipment to be about as expensive as solar panels are today. Right now, one of its units costs about 20,000 pounds ($27,500) to lease for five years.

“Everybody assumes a wind turbine is all about size,” said Barry Thompson, Alpha 311’s chief executive officer. “It’s never been about looking at the science from a different angle.”

Each of the little turbines can generate about as much power as a 20 square-meter solar array, according to Thompson. That won't replace a power plant, but could have a role in helping customers cut down energy bills, he said.

Small wind turbines have been around for decades, though they’ve typically struggled to find a market and haven’t benefited from the same declines in manufacturing costs as utility-scale wind towers. The tiny equipment has also struggled to compete with solar for small-scale applications.

A new generation of the technology is beginning to win a role, and Diffuse’s Kesby said he’s fielded interest from customers seeking a substitute for diesel generation in markets including the U.K., South Africa and Indonesia.

Alpha 311 also sees potential to deploy its systems in developing economies, and has had inquiries from non-governmental organizations interested in using the turbines to power water pumps or lighting.