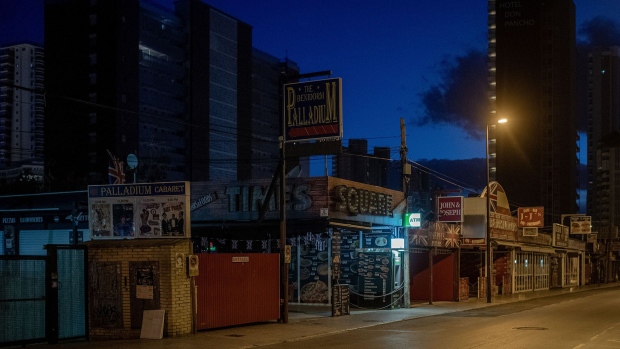 (Bloomberg) -- When Spain locked down to slow the coronavirus in March, about 25,000 British tourists were enjoying the beaches and bars of the Costa Blanca resort of Benidorm. Local officials quickly ordered hotels to shut their doors, and as the visitors packed their bags and flocked to the airport, the town’s tourism industry—its lifeblood—went into hibernation along with the rest of the country.

After the slowest start to the summer season in memory, things started to pick up modestly in June. With Spaniards and some foreigners dipping their toes in Benidorm’s waters, hotel and restaurant owners dared to think the summer might not be a complete write-off after all and began to imagine the return of some of those Brits.

Those hopes were dashed on July 25, when Prime Minister Boris Johnson ordered a two-week quarantine for anyone arriving from Spain—leaving Benidorm and hundreds of other towns up and down the Spanish coast feeling the whiplash of this stop-start-stop summer.

“It’s about the worst thing that could have happened,” said Javier del Castillo, owner of La Cava Aragonesa, a tapas bar along one of the narrow streets of the city’s historic core. Where normally he’d have customers—mostly Brits—lined up two-deep ordering albondigas, jamon iberico, and tortilla espanola washed down with glasses of rioja, the bar is almost empty. No one is allowed to stand because of social distancing restrictions, everyone must wear a mask when not eating, and the jamon is covered in plastic to keep it from getting contaminated.

The town’s wide, sandy beaches would typically be towel-to-towel with sun-worshipers in July. This year, the town has marked off squares in the sand with blue ropes, with a maximum of four people allowed per square. Would-be bathers must reserve in advance, but on a sunny afternoon it’s easy to find an empty square. “We have to continue fighting and we have to continue offering a level of safety because the pandemic continues,” said Benidorm Mayor Toni Perez.

The recent uptick in coronavirus cases in Spain, which motivated Johnson’s order, started in Aragon and Catalonia—more than 100 miles from Benidorm. While infections have started to increase across Spain, Benidorm authorities say the city has seen just 19 cases in the past two weeks.

The quarantine order “doesn’t reflect reality because there are a lot of places in England where there are more people infected than in some Spanish regions,” said Del Castillo, who is also head of a local food service association. He expects as many as half of Benidorm’s 1,200 bars and restaurants won’t survive the year.

That’s a big problem for Spain, where tourism accounts for 12% of output and which gets about 18 million visitors a year from Britain. The Spanish economy contracted by 18.5% in the second quarter, and tourism was among the hardest-hit sectors.

What’s bad for Spain is particularly bad for Benidorm, said to be the place where package tours were invented. Some 4 million visitors a year, about 40% of them British, cram into the modernist skyscrapers that line its beaches, laid out so that many rooms have a view of the water. On a typical summer day, dozens of flights ferry visitors from European capitals to nearby Alicante airport, where they board packed buses or trains for the one-hour ride to Benidorm.

The town of 70,000 has scores of cafes catering to British visitors, serving copious helpings of lager, fish and chips, and bangers and mash, with English Premier League soccer and Sky News on big screen TVs. Nightlife unspools in countless sweaty bars where young people from across Europe drink, flirt, and dance to B-list DJs.

Since the U.K. announced the quarantine, Benidorm’s hoteliers have seen eight cancellations for each reservation. Some hotels that had considered opening in the coming weeks will remain shuttered through next spring. Occupancy averages about 40%—mostly domestic tourists—at the hotels that are open. Normally in July, about 90% of beds would be booked.

Tourism officials are hoping the U.K. will soon ease the blanket quarantine and allow unrestricted travel from Spanish destinations with a low incidence of coronavirus. They say Johnson will face pressure from British tour operators and airlines that have also been hammered by the order. “The sooner they lift the quarantine order, the less of a disaster it will be,” said Nuria Montes, secretary general of Hosbec, a hotel and tourism association. "But we're not going to recoup anything. What's gone is gone.”

The crash in business has sparked a debate among people in the town’s tourism industry—which is almost everyone. Some say the town should seize the opportunity presented by the crisis. A few hotels that have remained closed are renovating, and some in the industry suggest that they take into account customer concerns about coronavirus in their redesigns. One hotel owner is getting rid of rooms configured for more than two people, and others are revamping their common spaces to provide more social distancing in response to the virus. “We have a fantastic opportunity to improve how things were before, to take things to the next level,”  said Javier Jimenez, director of Forst, a tourism business school based in the city.

Another camp counters that there’s little need to tinker with a business model that has served Benidorm well for decades. After this year’s bummer summer, the thinking goes, a vaccine will hit the market and the town can return to business as usual—at least for those who manage to survive the economic wreckage. “When the pandemic ends, we’ll get back to normal life,” said tapas bar owner Del Castillo. “We’ll go back to doing what we did before.”