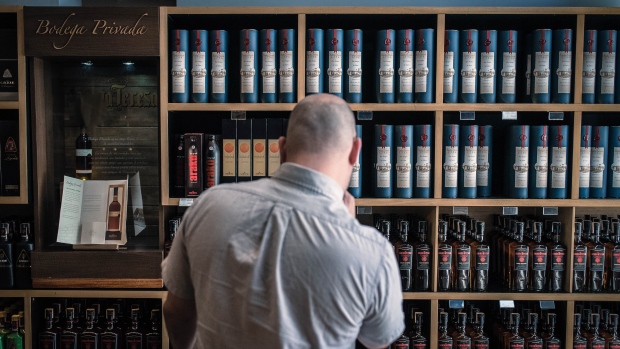 A customer browses bottles of Santa Teresa brand Venezuelan rum on display for sale at a liquor store in the La Castellana neighborhood of Caracas, Venezuela, on Thursday, July 12, 2018. After decades of whisky drinking, Venezuelans are turning to domestic rum as hyperinflation has raised the prices of top-shelf Scotch to over one billion bolivars. , Bloomberg

(Bloomberg) -- In what is perhaps the tiniest and almost certainly the most primitive bond market in the world, default isn’t the greatest risk that investors face.

This market can be found in Caracas, Venezuela, where the socialist government of President Nicolas Maduro is ever so slowly freeing up the battered economy to allow the kinds of capitalist ventures it had long banned. As part of the overhaul, the U.S. dollar is now the de facto currency in the country but, given the ad-hoc way that reforms are being rolled out, there’s no way to electronically transfer greenbacks from one bank to another.

So when a local rum maker decided to become the first company to sell dollar bonds in the country in at least two decades, investors shoved stacks of hundred-dollar bills into bags and lugged them over to the distiller’s bank in eastern Caracas. All sorts of techniques were employed -- everything from an armed-guard escort to an incognito approach -- to navigate the streets of one of the world’s most dangerous cities. And while the deal was minuscule -- totaling a mere $300,000 -- and limited to just investors with local bank accounts, its success late last year has triggered a wave of interest from both companies seeking financing and wealthy Venezuelans looking to get a return on their cash.

“What can a person who has dollars in Venezuela do with that money? Leave it the bank?” said Juan Domingo Cordero, a former president of the Caracas Stock Exchange who retired two years ago as the president of brokerage Rendivalores. “The problem is clearing the operations. We can’t continue to operate in cash.”

Ron Santa Teresa SACA, whose 1796 Ron Antiguo de Solera fetches about $40 a bottle in the U.S., generated plenty of interest for its sale from investors tired of earning zero interest in local banks.

Because the security exchange can only settle trades in bolivars, the distiller structured its debt as zero-coupon notes so that investors wouldn’t have to deal with the danger of picking up interest payments. The one-year bonds were sold at a discount of 96 cents on the dollar, with investors getting paid back at 100 cents at maturity with proceeds from exports.

A local corporate dollar-bond sale would have been almost unimaginable until very recently, after years of government interference in the economy decimated capital markets and put severe restrictions on foreign-currency transactions. But now, facing crippling U.S. sanctions that have sapped government finances, Venezuela has embarked on a reluctant embrace of private business and dollarization.

The moves have raised interest from daring investors wondering if now is the time to swoop in and buy distressed assets. Still, change is slow and local companies struggle with basic issues such as lack of fuel and constant blackouts.

Banking credit, limited by strict monetary policies and pullbacks in government subsidies, is hard to come by. Outstanding loans total less than $200 million, representing 0.5% of gross domestic product, according to local researcher Ecoanalitica. The average for Latin America is 30% of output. The number of commercial-paper sales in bolivars soared 60% last year, even though the local market trades the equivalent of just $60,000 a day, down from $5 million in the 1990s.

“We no longer have a subsidized economy or cheap loans,” said Jose Miguel Farias, finance director at Caracas-based brokerage Mas Valor. “And credit is the fuel that keeps businesses open.”

Investors with dollars are ready to put their money to work. There is about $2 billion in cash circulating in the economy, and another $400 million is sitting in no-interest accounts at local banks. There’s no way for Venezuelans to transfer the money overseas.

While Ron Santa Teresa’s bond spurred speculation that there would be an immediate wave of similar issuance, the ramp-up has been slower than expected. Other companies seeking to raise funds have been thwarted by regulatory and structuring issues, according to three people familiar with the process who asked not to be identified discussing confidential information.

“We need to democratize the market and simplify processes,” he said in an interview.

When Ron Santa Teresa issued its bonds, buyers assumed that a dollar-clearing system would be in place by the time they matured, so they could collect the proceeds electronically. Building that infrastructure before the bond matures now seems increasingly unlikely.

So once again investors with a certain level of derring-do will be on the streets of Caracas, furtively transporting thousands of dollars of banknotes through a city suffused with criminal gangs and frequently ranked as having among the world’s highest murder rates. But at least they’ll earn some interest.