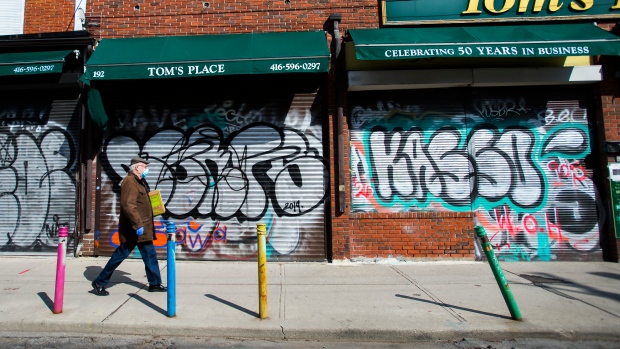 Canadian small business struggling during the COVID-19 pandemic will likely incur $117 billion in debt collectively that could take more than a year to pay off, according to a new study. The Canadian Press/Nathan Denette

MONTREAL - A new study says many Canadian entrepreneurs are focused on shoring up their balance sheets after recording a drastic drop in revenues and mounting debt during the first wave of COVID-19.

The Business Development Bank of Canada survey says the top priority of business owners is getting their financial houses in order, including reducing operating costs and improving cash flow.

Investing in technology was also a priority for entrepreneurs, according to the study which also listed a focus on remote work, online sales and reviving growth as other key areas.

The study found that small- and medium-sized businesses were hit hard by the crisis, with 76 per cent reporting a decline in revenues and profits during the pandemic.

Nearly half ending up laying off staff, while about 39 per cent of entrepreneurs took on more debt to survive, the BDC said.

Still, the BDC study said 87 per cent of entrepreneurs are confident they will make it through the crisis.