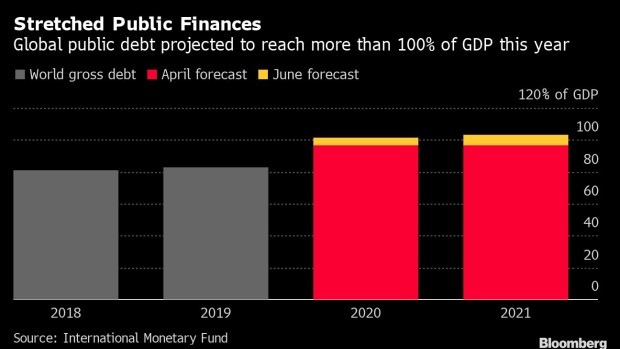 The issue has come to the fore amid the huge response to the fallout from the coronavirus. A large part of that has involved massive bond purchases to help governments fund support for their economies, which the BIS said has “blurred” the fine line between monetary and fiscal policy.

The European Central Bank ramped up its bond-buying plans since the pandemic hit Europe. It’s focusing efforts on weaker economies such as Italy as it strives to keep borrowing costs low in the euro zone.

The Bank of England has restarted quantitative easing, and Governor Andrew Bailey openly says that’s partly to help the government. He has denied that there’s any fiscal dominance.

The U.S. Federal Reserve has unveiled unprecedented monetary support and Chair Jerome Powell warned on Monday of unwinding any stimulus too soon.

The BIS said that the crisis-fighting measures don’t constitute monetary financing -- the direct financing of governments by central banks -- and the combined efforts were the right thing to do.

But it warned that as the situation evolves, it’s critical that central banks operate independently so they can “resist any possible pressures not to increase interest rates.”

That’s because with the global debt-to-GDP ratio forecast to top 100% this year for the first time, some governments may favor lower interest rates for longer.

“So far, the objectives of central banks and governments have coincided,” the BIS said. “But should inflationary pressures emerge at some point, tensions could arise.”

In its report, the BIS also said stiffer regulatory standards for asset managers, including money market funds, are needed. Central banks have already highlighted this as a source of “vulnerability” during the height of the virus crisis.

“The least central banks can do and other financial authorities is to take a good look into this activity,” BIS General Manager Agustin Carstens said, adding that there could be a “systemic dimension” to the funds.

The BIS expects a slow economic recovery, with a u-shaped scenario possibly “out of reach,” putting the onus on governments to enact growth-friendly reforms.

At the same time, many companies won’t remain viable, meaning that in some cases the liquidity crunch could turn into a solvency crisis.

Ultimately, the state’s relationship with the private sector is likely to change as a result of Covid-19.

“A surge in corporate defaults is on the cards,” it said. “As a natural consequence of dealing with insolvency problems and of central banks’ increased footprint in the economy, the role of the state in the economy will probably loom considerably larger. And so too might the policy challenges.”