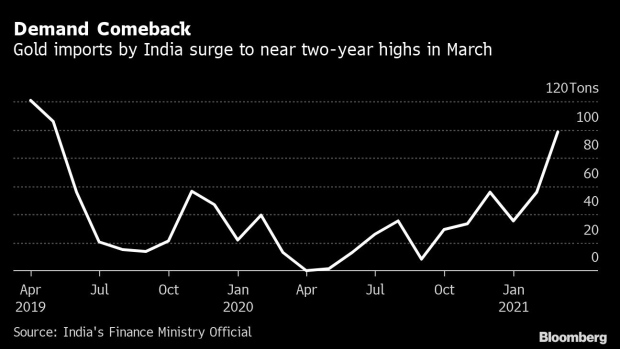 An employee arranges gold necklaces inside a Kalyan Jewellers store during the festival of Dhanteras in Noida, India, on Friday, Nov. 13, 2020. India's main holiday season -- culminating Saturday with Diwali, the festival of lights -- appears to be giving a much needed boost to demand, with online retail sales to business activity indicators signalling Asias third-largest economy is recovering. Photographer: Prashanth Vishwanathan/Bloomberg , Bloomberg

(Bloomberg) -- Gold imports by India surged in March to the highest monthly total in nearly two years as a slump in prices stoked demand for jewelry during the ongoing wedding season.

Overseas purchases increased more than sevenfold to 98.6 tons last month from 13 tons a year earlier, according to a person familiar with the data, who asked not to be identified as the information isn’t public. That would be the highest since May 2019. Finance Ministry spokesman Rajesh Malhotra didn’t immediately respond to calls to his mobile phone.

Imports during the first three months of 2021 more than doubled in the world’s second-biggest consumer to almost 190 tons, according to Bloomberg calculations based on the data.

Benchmark gold futures in India have tumbled about 17% from a record in August last year, boosting demand during the wedding season and ahead of Akshaya Tritiya next month, the second-most auspicious day to buy gold in the Hindu calendar.

Still, a resurgence in virus cases and restrictions on movement and business activity in some states is worrying jewelers as it could threaten the revival in sales. In Maharashtra, which houses the biggest bullion market in the country, non-essential businesses have been asked to stay shuttered for the rest of April as infections soar.