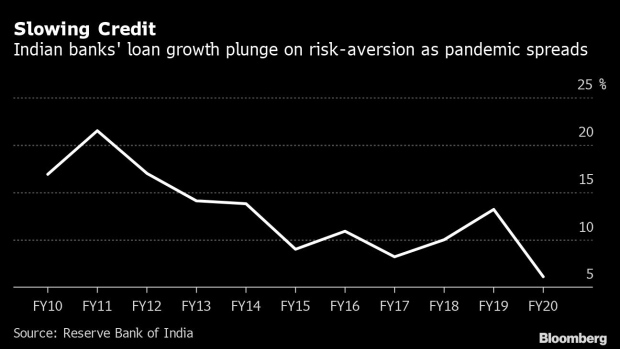 (Bloomberg) -- India’s banks will excuse borrowers from repaying their loans for another three months until the end of August, to provide some relief for businesses struggling under the lockdown, Reserve Bank of India Governor Shaktikanta Das said.

The move came after an unscheduled monetary policy meeting which decided to cut interest rates to boost an economy that is set to contract in the year ending March 2021. The central bank had earlier announced a moratorium that was to expire at end of June.

At 9.3%, India already has the worst proportion of bad loans in the world, and that ratio could rise by another 7 percentage points due to the coronavirus crisis, according to a McKinsey & Co. report in April.

The banks’ risk aversion prompted the government to announce a package of loan guarantees for small businesses last week.

Banks’ loan growth fell to 6% in year ended March, the lowest in nearly six decades and is expected to slow further to 2-3% in the current year, according to Standard & Poor’s local arm CRISIL Ltd.