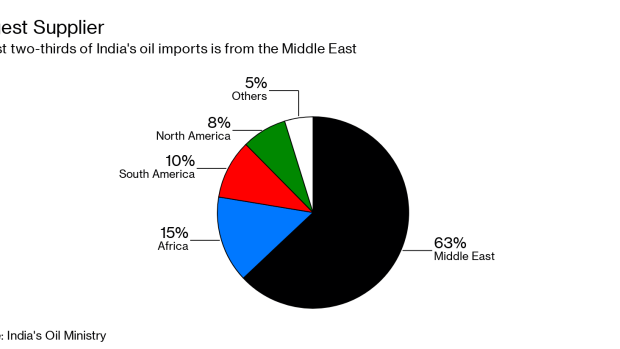 An attendant sits between two fuel pumps at a Bharat Petroleum Corp. gas station in Mumbai, India, on Thursday, June 28, 2018. The Indian rupee slumped to an all-time low as a resurgence in crude prices and the emerging-market selloff took a toll on the currency of the world's third-biggest oil consumer. Photographer: Dhiraj Singh/Bloomberg , Bloomberg

(Bloomberg) -- India, which is heavily dependent on Middle Eastern oil, is looking on with increasing apprehension as the U.S. and Iran flirt with war.

The country imported 84% of its crude in the last financial year, government data show, and two of every three of those barrels was sourced from the conflict-prone region. A major war in the Middle East threatens to push up consumer prices, widen the nation’s external deficits, and potentially derail Prime Minister Narendra Modi’s bid to revive flagging economic growth.

Every $10 increase in the price of a barrel of crude widens India’s current-account deficit by about 0.4% of gross domestic product, said Sonal Varma, chief India economist at Nomura Holdings Inc. The country is already struggling to replace Iranian barrels lost due to U.S. sanctions, she said.

Around 10% of Indian oil imports came from the Persian Gulf nation in the year through March, according to government data.

Brent oil has risen around 8% from a low in mid-June as attacks on tankers near the Persian Gulf and Iran’s downing of a U.S. drone pushed the two countries to the brink of war. India’s 39.1 million barrels of emergency crude reserves are only capable of meeting its needs for 9.5 days. By comparison, China is estimated to have stockpiles of about 550 million barrels, while the U.S. has 645 million.

Prime Minister Modi is trying to address the problem, and is planning to add two new reserves with a combined capacity of 47.6 million barrels.

India’s navy deployed two ships to the Persian Gulf to provide security to Indian-flagged vessels last week, while the nation’s oil minister has reached out to Saudi Arabia and the OPEC+ coalition to ensure they work to maintain crude prices at reasonable levels.

Once the fastest-growing Asian economy, expansion slowed to 5.8% in the three months through March from a year earlier, well below the 6.3% forecast in a Bloomberg survey. Inflation has accelerated to 3.05% in May from 1.97% in January. India is also struggling with high unemployment and problems with its shadow banking system.

To contact the reporters on this story: Debjit Chakraborty in New Delhi at dchakrabor10@bloomberg.net;Saket Sundria in Singapore at ssundria@bloomberg.net