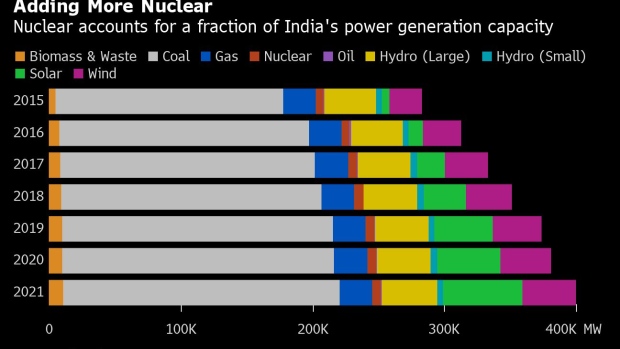 (Bloomberg) -- NTPC Ltd., India’s top power producer, is planning to build a massive nuclear fleet that’ll aid the nation’s push to shift away from coal and curb emissions to hit net-zero by 2070.

The state-run company aims to install 20 to 30 gigawatts of nuclear capacity by 2040, according to a person familiar with the plans, who requested anonymity to discuss the private proposals and said the target remains tentative. India currently has 22 operational reactors with about 6.8 gigawatts of capacity.

New Delhi-based NTPC is considering deploying small-scale modular reactors, known as SMRs, as part of the strategy, according to multiple people with knowledge of the company’s plans. The producer has an overall power fleet of 70 gigawatts, of which more than 80% is coal-fired.

The company will also keep pursuing larger projects in a joint venture with state-run Nuclear Power Corp. of India Ltd. — which currently operates all of India’s atomic generation capacity — the people said. NTPC has assembled a 15-member team in Mumbai to drive its nuclear ambitions, according to one of the people.

Nuclear power is undergoing a renaissance as Asian and European countries look to decarbonize, deal with a squeeze on natural gas and other fuels following Russia’s invasion of Ukraine, and aim to bolster their energy independence. China, Japan and South Korea are all looking to build more reactors

NTPC is considering building SMRs of 100 megawatts to 300 megawatts, the people said. The state-run electricity generator is favoring the smaller reactors as they would be quicker to build and easier to adjust to the grid requirements, one of the people said. They can also be installed off-grid in remote areas that lack connectivity.

SMRs are still very much in their infancy, however, with hardly any projects worldwide. There are two 35-megawatt reactors that are operational at a floating nuclear project in Russia and others under construction or at the licensing stage in countries including the US, Canada, China and Argentina, according to the International Atomic Energy Agency.

The economic competitiveness of SMRs is still to be proven in practice, despite lower upfront capital costs, the agency said. Manufacturers, including NuScale Power Corp. and the Bill Gates-backed TerraPower LLC, say their machines will be cheap and quick to deploy. There are about 80 unique mini-reactor designs in development around the world, with some vendors promoting SMRs as solutions for remote, frontier towns in need of power.

A new embrace of nuclear comes as India, the world’s third-biggest emitter, moves toward its net zero target. The country’s corporate heavyweights including Reliance Industries Ltd. and Adani Group are pumping billions of dollars into clean energy projects, including solar, wind and green hydrogen.

NTPC is aiming to reduce the share of fossil fuels to nearly 50% of its overall capacity by 2032, compared with about 90% now. That shift will be driven by more solar, wind and hydropower facilities, as well as nuclear.

The company plans to finalize bringing in a major investor in its renewables unit by March 2023 and will then proceed with an initial public offering, the people said. The list of initial bidders includes Brookfield Asset Management Inc., Canada Pension Plan Investment Board and Abu Dhabi National Energy Co.