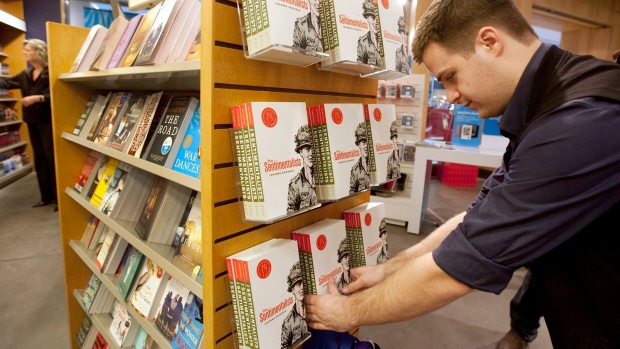 Indigo Books and Music employee Murray Simpson puts copies of the 2010 Giller Prize-winning work "The Sentimentalists" by Johanna Skibsrud on the shelves at the Eaton Centre in Toronto , THE CANADIAN PRESS/Darren Calabrese

Indigo Books & Music Inc. (IDG.TO) will rethink its general merchandise strategy as sales slowed in the past year, said the company's founder, but it remains convinced that's where the company's future growth lies and not with a return to books.

"Last year, we just hit a wall," said CEO Heather M. Reisman during a conference call with analysts Wednesday, a day after the company released its fourth-quarter and full-year financial results.

Up until last year, the company had several years of roughly 20 to 30 per cent year-over-year growth in general merchandise, she said.

Partly due to the lack of recent growth, Indigo decided to change its creative direction and take a fresh look at how it approaches the category, she said.

"There's a real need for newness on a continuing basis and that's our job," she said, adding the company wants to put its efforts this financial year into the overall evolution of its general merchandise and lifestyle products.

Reisman said it will take a couple of quarters for his impact to come onboard.

She noted the future of the business does not lie in returning to books, which remain the base, but in making sure the general merchandise category is strong and growing. Once that's established, she said, the company will return to look at its U.S. strategy.

Indigo opened its first American store this past financial year in New Jersey.

The traffic in the mall where the store is located took a significant dip this year, she said, noting the customers who have visited tend to become repeat customers.

The margins in the American store are also "so much higher" than in Canadian Indigo locations, she said, as the company prices items the same in both countries.

Indigo feels the basic orientation of its American strategy is correct, she said.

"I say that respectfully given these numbers are nowhere near what any of us want them to be," she said, adding the company won't open any new stores this year.

The commentary came a day after Indigo reported a nearly $40-million net loss for its 2019 financial year, widely missing analyst expectations. The company said the loss was due partly to a Canada Post strike and less consumer spending in the final quarter.