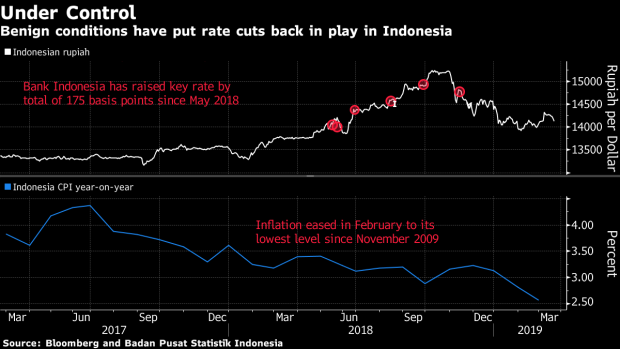 The seven-day reverse repurchase rate was left at 6 percent on Thursday, as predicted by all 36 economists surveyed by Bloomberg. Governor Perry Warjiyo and his board raised the rate by a total of 175 basis points last year to head off a market rout in developing economies and a slump in the currency, triggered by tighter U.S. monetary policy.

“The decision is consistent with efforts to strengthen external stability, especially to control the current account deficit and maintain the attractiveness of domestic financial assets,” Warjiyo told reporters in Jakarta.

(Updates with comment from central bank in third paragraph.)

To contact the editors responsible for this story: Nasreen Seria at nseria@bloomberg.net;Thomas Kutty Abraham at tabraham4@bloomberg.net