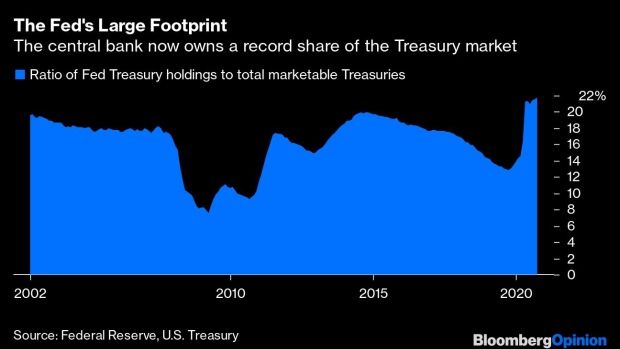 Randal Quarles, vice chairman of supervision at the U.S. Federal Reserve, speaks during the American Bar Association Banking Law Committee annual meeting in Washington, D.C., U.S., on Friday, Jan. 17, 2020. The Federal Reserve is shifting its focus from writing and revising rules aimed at limiting risk in the banking system to a concentration on how lenders interpret the restrictions, Quarles said. , Photographer: Bloomberg/Bloomberg

Quarles, who typically centers his remarks on topics like the health of the U.S. banking system and the transition away from the London interbank offered rate, made surprisingly candid comments last week when discussing the ballooning size of the U.S. Treasury market and the central bank’s role in it. Effectively, he acknowledged that he’s grappling with the question of whether the Fed has no choice but to buy bonds forever.

Will there be some indefinite need for the Fed to provide — not as a way of supporting the issuance of Treasuries, but as a way of supporting a functioning market in Treasuries — to participate as a purchaser for some period of time? I haven’t concluded that that’s the case, the institution certainly hasn’t concluded that that’s the case, but I do think it’s an open question.”

A few things immediately stand out — most notably the phrase “indefinite need,” which could very well be a first for a sitting Fed official. The idea of “QE-infinity” has been something of a punch line for a decade within financial markets after the Fed launched into multiple rounds of quantitative easing in the years after the financial crisis. But it became a much more serious reality in September 2019, when the critical repo market suddenly malfunctioned to such an alarming extent that the central bank was forced to flood the financial system with cash. It abruptly boosted the size of its balance sheet by $75 billion in the week through Sept. 18 and an additional $88 billion in the period through Oct. 2, two of the sharpest weekly increases since 2009. Then it brought out a bazooka and announced it would also buy tens of billions of dollars of Treasury bills each month. By the end of the year, the Fed’s balance sheet had ballooned by $400 billion.

I bring up this episode — rather than the chaos that gripped the $20.4 trillion Treasury market in March, which was the topic of Quarles’s speech — because there wasn’t any huge exogenous shock at the time like the Covid-19 pandemic just a few months later. Rather, the repo market’s breakdown seemed to indicate that the financial system, as structured, simply buckled under the weight of larger federal budget deficits combined with the Fed pulling back from buying bonds. The implication of this, of course, is that there are so many Treasuries out there that the Fed needs to “monetize” the debt in some form, whether by conducting repo operations or large-scale asset purchases.

Quarles is clearly uncomfortable with that kind of framing, judging by his need to interject that the Fed’s bond buying should be seen “not as a way of supporting the issuance of Treasuries, but as a way of supporting a functioning market in Treasuries.” But as much as he tries to draw a distinction, those two things are effectively one and the same. As I wrote last week, Fed Chair Jerome Powell and his colleagues could be much more forceful on the need for more fiscal spending if they wanted. All they would have to do is pledge to increase their monthly purchases of Treasuries in line with certain policy initiatives, such as extra unemployment benefits or funding for state and local governments. But that would give away the game, which is why they consistently describe their bond buying in terms like “market functioning.”

Quarles also took the rare step of walking back his remarks, saying at an event less than 24 hours later that “I wouldn’t want the comments that I made today about thinking about Treasury market structure to suggest that I think that there’s some need for some permanent backstop of the Treasury market in normal times.”

It’s hard to not interpret them in that way, but leaving that aside, I’d be curious what “normal times” means to Quarles and other Fed officials. There’s little doubt that its Treasury purchases — or even just the threat of ramping them up — helps to keep benchmark yields right about where the central bank wants them. And the Fed considers rock-bottom long-term borrowing costs as a complement to keeping the fed funds rate near zero to boost the economy. So is normal when the central bank is raising interest rates again? That, in turn, would mean U.S. inflation “has risen to 2% and is on track to moderately exceed 2% for some time,” per its new framework. That could be quite a while, indeed.

For now, the central bank holds about 22% of all marketable Treasury securities, which is a record high and up from a peak of 20% in 2014, according to Fed data going back 17 years. In September 2019, it represented just 13% of the Treasury market, the smallest share since early 2011.

I would be shocked if it ever reached such a low percentage again — and I doubt I’m alone in that thinking. That’s why it matters that a Fed governor like Quarles brought up the “indefinite need” to support the Treasury market, even if he swiftly sought to tone it down. It’s not so much that the concept is at all surprising to bond traders, but rather saying so in a public setting shines a light on the Fed’s thinking about just how much of a role it needs to play in the world’s biggest bond market to prevent breakdowns in the financial system.

That has significant implications for the coming years, particularly given expectations that a Democratic sweep of the White House and both chambers of Congress will usher in trillions of dollars of fiscal stimulus. That would follow a fiscal year during which the U.S. budget deficit more than tripled to $3.1 trillion, pushing the national debt higher than the economy’s size. Just to maintain a roughly 20% share of the Treasury market, the Fed would have to buy hundreds of billions of dollars of securities, even if the U.S. economy is on the rebound.

Put it all together, and it sure sounds like infinite QE. Just don’t expect many more Fed officials to say it.