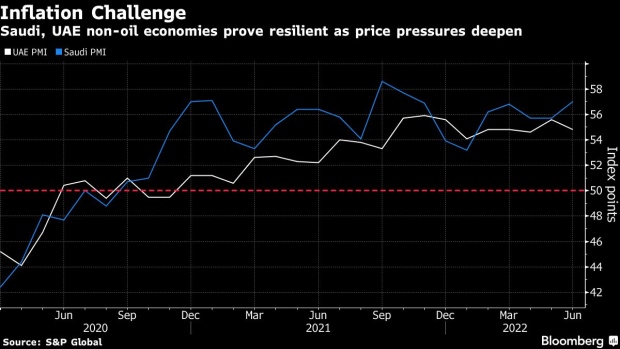 Price pressures spread across Saudi Arabia and the United Arab Emirates without derailing growth, as employment and sentiment in their non-oil economies stayed resilient in June.

Input costs soared in the UAE at the fastest pace for 11 years and reached a 22-month peak in Saudi Arabia, according to separate surveys published by S&P Global on Tuesday. But new orders rose sharply in both of the Arab world’s two biggest economies, leading to more optimism among businesses about the outlook.

S&P’s Saudi Purchasing Managers’ Index rose to 57 from 55.7 in May, while a similar gauge for the UAE dropped slightly to 54.8 last month. They remained well above the 50 mark that separates expansion from contraction.

“Saudi Arabia’s non-oil economy continued to go from strength to strength in June,” said David Owen, economist at S&P Global Market Intelligence. “However, the latest data also signaled an acceleration of input cost pressures, as fuel and raw material prices continued to rise in the face of global supply challenges.”

Although less intense than in other parts of the world, cost pressures are also on the rise in the oil-rich Gulf region, prompting Saudi and UAE authorities this week to set aside about $13 billion to support low-income citizens and stockpile key commodities.

Gasoline prices are especially a concern in the UAE, where they have outpaced increases in neighboring states.

The uptick in the cost of fuel had knock-on effects by increasing expenses and forcing businesses to raise salaries, according to S&P. Average wages in the UAE jumped at the fastest pace for over four years, it said.

But similarly to May, competition meant that companies didn’t always pass on higher costs, cutting into their margins and raising the risk that charges will soon have to rise for customers. For now, UAE output prices fell the second month running, and by the most since late 2020, S&P said.

By contrast, output charges continued to increase in Saudi Arabia’s non-oil economy in a sign that firms mostly passed on higher costs to their customers.

“UAE businesses came under increased pressure from rising input costs in June,” Owen said. “The threat of strong competition led them to offer price discounts to protect their sales.”