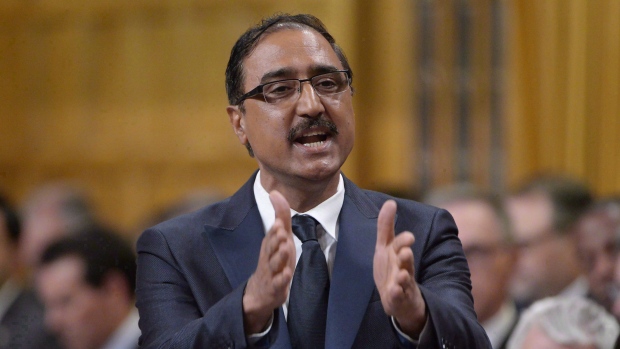 Minister of Infrastructure and Communities Amarjeet Sohi responds to a question during question period in the House of Commons on Parliament Hill in Ottawa on Monday, June 5, 2017. , The Canadian Press

OTTAWA -- The federal infrastructure minister is defending a budget shift on his file, saying the planned delay in more than $2 billion in spending has nothing to do with the program itself.

Amarjeet Sohi says the majority of the approximately 4,000 projects the government has approved for funding since November 2015 are underway, based on the information cities and provinces have provided the Liberals -- even though federal payments so far are a fraction of what's budgeted.

Infrastructure Canada's website shows that as of last Friday, there was about $20.5 billion left unspent across 13 different programs, including two set up by the Liberals.

The two Liberal funds -- one for public transit projects, the other for water systems -- have together doled out about $82 million, leaving about $5.2 billion unspent.

Sohi says the government's plan to move funding has more to do with cash flow management than it does with the state of infrastructure work.

Federal dollars only flow once project proponents submit receipts for reimbursement, often leaving a lag of weeks, months or years between when work takes place and when infrastructure money is actually spent.