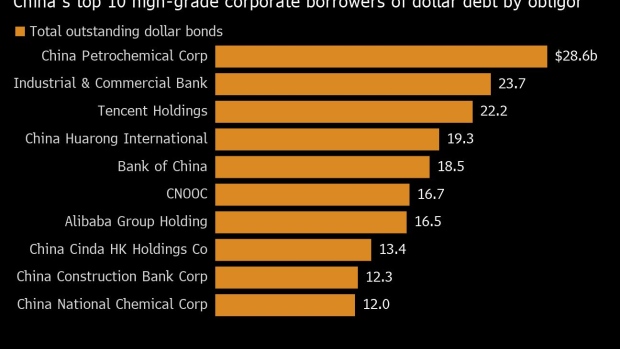 (Bloomberg) -- The numbers circulating through official Beijing were even worse than feared.

This was looking like one of the biggest single money-losers in modern Chinese history. But who, if anyone, would be willing to clean up the mess at China Huarong Asset Management Co., the nation’s teetering “bad bank?”

Its long-delayed financial results -- at the time, still unknown to the wider world -- reached Chinese officialdom in mid-July. The figures were so dire that regulators were hesitant to sign off on them. They feared any association with Huarong might hurt their careers.

The Ministry of Finance, which has controlled Huarong since its creation, was eager to hand over the keys -- fast. Part of China’s sovereign wealth fund considered making a play but then, after going through the books, wanted money from the mighty People’s Bank of China first. The idea was shot down.

Finally, eyes turned to another rich and powerful state enterprise, Citic Group – and the people there began to sweat. They worried they’d be the ones who got blamed if things kept going south.

Despite everything, it looks like Huarong is getting its rescue. Beijing isn’t ready to see a state-owned enterprise as big and connected as this one go down -- to let Huarong become, in effect, a Lehman Brothers of China. After months of anxiety, the matter has been settled for now: Huarong will receive financial assistance from Citic and several other state-backed companies. A potentially calamitous default has been averted. Bondholders are exhaling. Stockholders look like they’ve been hung out to dry. The inside story of China’s too-big-to-fail moment reaches into the highest levels of the nation’s financial power structure. It winds through the ministries and regulatory agencies where technocrats are already working to fix other, bigger problems in the nation’s debt-ridden financial system. Officials must walk a fine line. Until Huarong mired itself in debt, few questioned whether Beijing would stand behind the biggest state-owned enterprises should disaster strike.

Now, after an era of corporate excess, President Xi Jinping is cracking down. He wants to rein in heady borrowing – much of it enabled by creditors’ bedrock assumption that SOEs are too big to fail – without risking a full-blown crisis.

This account has been pieced together from interviews with people in various parts of the Chinese government. Given the stakes, they spoke on the condition that they not be named.

The Huarong rescue, announced on Aug. 18, was the culmination of months of bureaucratic infighting, ego-flexing and buck-passing. At its heart is the question investors have been asking all along, and which many still are: who is – and who isn’t – too big to fail in China? Huarong got bailed out. Other, less-well-connected companies may not be so lucky. Of particular concern is the property giant China Evergrande Group, now perhaps the country’s single biggest financial worry.

Sergey Dergachev, a senior portfolio manager at Union Investment in Frankfurt, says global investors can no longer be certain that every big company or state-owned enterprise will get bailed out in a pinch. “This assumption is not valid anymore,” says Dergachev, who has invested in Huarong. Bond investors, he adds, are going to have to stay on their toes.

For years China let companies like Huarong and Evergrande borrow heavily to expand. Now Xi has alarmed foreign investors by moving to redefine the relationship between the state and private business and by reining in China’s internet giants and other industries. The crackdown has erased more than $1 trillion in shareholder value.

Huarong was created after the Asian financial crisis of the ’90s to help safeguard Chinese banks. The idea was to have the “bad bank” mop up souring loans that had been made to many state-owned enterprises.

Then its longtime chairman, Lai Xiaomin, began borrowing heavily to expand into all sorts of business. Known as the God of Wealth, Lai was later swept up in a corruption scandal and then executed this past January, just as the problems at Huarong were gaining attention around the financial world.

By June, no one was under any illusions: Huarong needed help. But inside the company’s Beijing headquarters, employees were shocked by the mere suggestion that the once mighty Huarong might become just another subsidiary of some other SOE. Huarong’s decades-long ties to the Ministry of Finance conveyed status and prestige – and suggested a level of government support that, in better times, had meant cheap borrowing costs. Huarong executives were counting on some sort of government help but never dreamed their prized link to the finance ministry might be severed, according to people familiar with the matter.

And yet various regulators, driven by individual interests, couldn’t agree on who should assume responsibility for Huarong – or, more urgently, who would have to pay for it, according to people familiar with the matter. Numbers from offshore subsidiaries and onshore units were tallied again and again. It was clear Huarong had neither the time nor the money to save itself.

Central Huijin Investment Ltd., an arm of China’s sovereign wealth fund, began kicking the tires. But it was hoping the central bank would extend a loan to help finance a deal. The proposal was promptly nixed.

By late June, regulators pulled in Citic. The conglomerate is a ministerial-level financial powerhouse directly overseen by China’s cabinet, with more than $1 trillion of assets.

For nearly two months, a Citic team pored over the books at Huarong’s headquarters. Even at Citic, a Chinese company as connected as they come, the political nature of the task raised eyebrows. Huarong’s finances were so troubled and past dealings so fraught that some members of the Citic team worried they might be blamed for the mess. They wanted assurances that they wouldn’t be held responsible should higher ups take issue with any rescue plan later on, one of the people said.

The numbers, audited by Ernst & Young, were dire. Huarong had lost 102.9 billion yuan ($15.9 billion) in 2020, more than its combined profits since going public in 2015. It wrote off 107.8 billion yuan in bad investments. For two weeks, officials resisted signing off on the results out of concern for their own careers. But the clock was ticking: Huarong had to disclose the results, overdue for months, by the end of August or it would be deemed in technical default. The deadline was only weeks away.

At last, terms were drawn up and the State Council, long silent about Huarong, gave its blessing to a rescue that combines a government bailout with a more market-driven recapitalization. Huarong will get about 50 billion yuan of fresh capital from a group of investors led by Citic, which will assume the Ministry of Finance’s controlling stake, people familiar have said. Huarong is expected to raise 50 billion yuan more by selling non-core financial assets. On August 18, Huarong went public with its huge losses and quickly followed up with news of its rescue.

Bondholders cheered. For the gutsy, Huarong could’ve been the trade of a lifetime: some of the perpetual bonds have soared to 97 cents from a low of 50 cents in May.

Market exuberance aside, many remain divided on the outlook from here. After news of the rescue hit, Moody’s Investors Service cut Huarong’s credit rating two notches to Baa2, just above junk-grade, and warned more downgrades might be forthcoming. Fitch Ratings, meantime, revised its outlook to positive from negative. S&P Global is still considering a downgrade.

Equity investors are licking their wounds. Warburg Pincus was among a group of strategic investors that bought a $2.4 billion stake in Huarong before it went public in 2015, paying 2.12 yuan per share. Huarong’s stock traded at HK$1.02, or the equivalent of 0.85 yuan, before it was suspended in April. That translates to less than 0.3 times its end-June 2020 book value.

The China Banking and Insurance Regulatory Commission and Huarong didn’t respond to requests for comment. Citic and Warburg Pincus declined to comment.

Wu Qiong, head of fixed income research at BOC International Holdings Ltd. in Hong Kong, says few Chinese companies are as politically connected as Huarong, even a sprawling developer like Evergrande. “The government has no strong incentive to rescue it, at least not directly involved like this,” she says.

For David Loevinger, a former senior coordinator for China affairs at the U.S. Treasury, the takeaway is much the same. Everyone used to believe Huarong was too big to fail. “Now, you cannot say that with 100% certainty,” he says. His advice to investors: choose wisely.