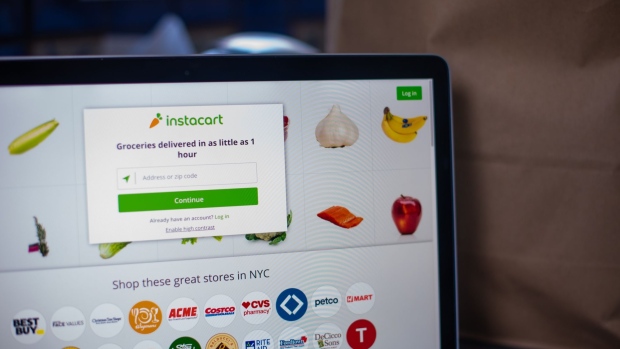 The Instacart website on a laptop computer arranged in Hastings-on-Hudson, New York. , Bloomberg

(Bloomberg) -- Instacart Inc. has reached a deal with JPMorgan Chase & Co. to offer a credit card to customers who’ve flocked to the grocery delivery service during pandemic lockdowns.

The two are collaborating on a card that could debut early next year, according to a person familiar with the matter. JPMorgan also is exploring a potential card partnership with DoorDash Inc., the food delivery app that it already partners with for credit-card rewards.

Representatives for JPMorgan and DoorDash declined to comment. Instacart spokesperson Dani Dudeck said the venture isn’t commenting “on the industry speculation.” The Wall Street Journal reported earlier on the talks, noting that DoorDash has received proposals from other card issuers as well.

Consumers have leaned heavily on the apps for groceries and takeout in the past year after governments around the world ordered people to stay home to stem the deadly virus. Even as restrictions ease, many users are sticking to those habits.

Yet banks have struggled with creating compelling card offerings for players in the gig economy. Barclays Plc said last year it temporarily stopped accepting applications for a card with Uber Technologies Inc. after only a few years in the market. Ridesharing rival Lyft Inc. also tried to get a co-brand credit card off the ground and had selected Synchrony Financial as a bank partner. But after months of effort, it was scuttled.

DoorDash, like Lyft, already has a lucrative partnership with JPMorgan that offers the bank’s cardholders extra points for money spent on its platform.

Grocers, too, have struggled to gain traction with co-brand cards. Even Kroger Co., the largest U.S. chain with almost 2,800 stores, didn’t break into the top 10 co-brand card programs in the U.S., according to Packaged Facts.