After a decade of buying up rivals to become Canada’s largest property and casualty insurer, Intact Financial Corp. is looking across the Atlantic with its biggest deal yet.

Intact’s portion of the deal is $5.1 billion and brings it into entirely new markets in Europe while bulking up its core Canadian business. It supercharges an acquisition spree that has turned the Toronto-based company into the dominant force in Canada’s non-life insurance industry, a little more than a decade after it was cast off by Dutch insurer ING Groep NV.

The RSA deal also will be a major test of whether Chief Executive Officer Charles Brindamour, 50, can replicate the firm’s success in digesting acquisitions on a larger scale and farther afield that it has ever attempted before. 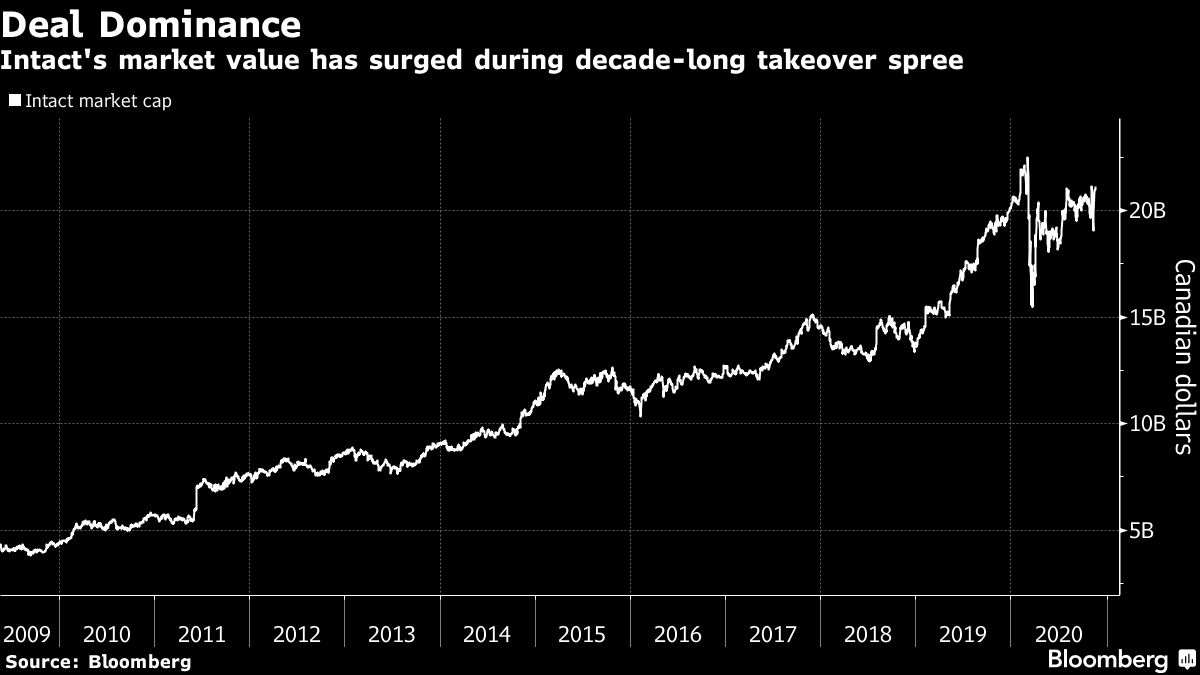 “We have an established track record of integrating companies,” Brindamour, said during a press conference on Wednesday. “We’ve done that many times in the past. We feel that we are in a strong position to tackle that challenge.”

Intact traces its roots back to 1809, when a group of businessmen formed the Halifax Fire Insurance Association. That firm was acquired in the 1950s by a Dutch insurer that eventually became part of ING. In 2009, ING divested its 70 per cent stake in ING Canada Inc., which changed its name to Intact.

Brindamour, who had become CEO about a year earlier, wasted little time in bulking up the newly independent insurer. Intact bought French insurer Axa SA’s Canadian business in 2011, bolstering its domestic premiums by almost 50 per cent.

Intact went on to make 12 more deals with a total announced value of about US$3.1 billion before the RSA acquisition, according to data compiled by Bloomberg. The firm serves about one in five families and one in four small- and medium-sized businesses in Canada, Brindamour said.

So far, the strategy has been rewarded. The company’s shares have risen more than fourfold since since May 19, 2009, the day its listing as Intact became official. That compares with a 68 per cent gain for the S&P/TSX Composite Index. Intact’s market value of about C$21 billion is up about fivefold in that time.

Intact has benefited from being an independent, publicly traded company competing against policyholder-owned insurers that can’t make deals the same way, said Victor Adesanya, an analyst with DBRS Morningstar. The company also has a track record of making its acquisitions profitable by spotting trends in the market and exiting unprofitable business lines, he said.

“They’re able to deploy advanced data analytics when it comes to risk selection, segmentation and identifying risk,” Adesanya said in an interview. “They do this better than others in the industry.”

The RSA takeover -- the largest ever by a Canadian property and casualty insurer -- will put that system to the test. For one, it will add significant bulk to the company, increasing annual premiums in Canada from $10 billion to about $13 billion and boosting total premiums about 67 per cent to $20 billion.

Intact’s workforce will balloon 63 per cent to 26,000, its specialty-insurance business will grow by 30 per cent, and it will be navigating unfamiliar regulatory environments in the U.K., Ireland and Denmark.

Brindamour says he has admired RSA for a long time and has thought deeply about the complexity of an acquisition. He said he’s comfortable with the deal now because RSA’s businesses have leadership positions and Intact’s existing operations are in “very good shape.”

He noted that his company’s net operating income per share has grown at a 10 per cent compound annual rate over the past decade and revenue growth has exceeded the industry’s by about 4 per cent a year over that time.

“The reason why acquisitions make sense for us is because we’re an outperformer in the markets where we operate,” Brindamour said.