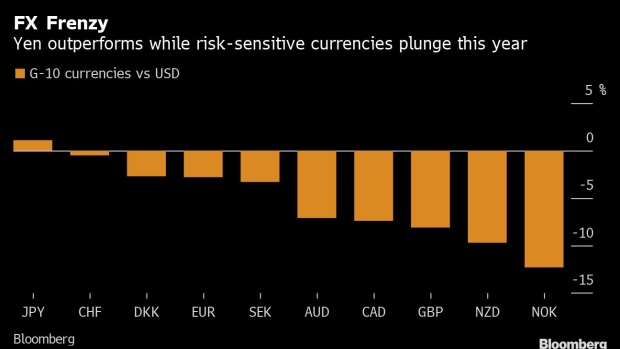 (Bloomberg) -- As the global economy contends with the biggest growth slowdown in decades, an Invesco fund manager has flipped his positions.

Alessio de Longis, a New York-based fund manager at the $1.3 billion Invesco Oppenheimer Global Allocation Fund, said he is now underweight traditional haven currencies -- including the yen and the Swiss franc -- which are overvalued relative to their peers. He’s considering adding more exposure to the euro, Canadian dollar, Swedish krona and Norwegian krone since those are likely to carry more upside potential when growth prospects pick up.

These currencies may get a boost as central banks and governments globally unleash billions of dollars in stimulus and rate cuts to counteract the crisis. Even though the outlook is grim at the moment, de Longis believes much of the current economic gloom has already been priced in.

There’s a “clear improvement in growth expectations even though real economic data is still cratering,” de Longis said. “Growth bearishness had been priced extensively to the point where” the risk-sensitive currencies had cheapened relative to peers and “the returns on a go-forward basis are looking more attractive.”

Most currencies have rebounded since March when a shortage of dollars fueled a sell-off and drove global demand for havens. Commodity-linked currencies plunged during that time, with the Norwegian krone among the hardest hit, dropping to the lowest since 1971.

With investors gingerly tip-toeing back into riskier assets this month, Germany and France reaching a key funding agreement for the region, and oil prices rebounding from historic lows, the euro, krone and commodity-linked currencies are showing stability, warranting a second look.

Bank of America Corp. strategists turned less bearish on the krone this week, even as they remain cautious on risk-sensitive currencies. They see the krone as the most undervalued among Group-of-10 peers and argue that it “stands in a good position to benefit once concerns around Covid-19 settle,” Athanasios Vamvakidis and colleagues wrote in a note Wednesday.

Among G-10 counterparts, the krone is weaker by ~12% against the dollar this year, making it the worst performer, despite its recent rebound. The euro, loonie and krona are down 2.8%, 7.4% and 3.2%, respectively. In contrast, the yen is the only one to top the greenback this year, rising by 1%.

The Invesco fund manager is underweight the Australian and New Zealand dollars because their valuations are still not “that attractive.”

De Longis is neutral on the dollar. However, he leans bearish and is waiting for a catalyst for further depreciation as the U.S. currency remains resilient. He is watching for signals in European, Korean, Taiwanese and Chinese stock markets to gauge a stronger turning point in global risk appetite.

“This environment of favorable risk appetite is certainly conducive to a dollar bear market, but what we’re not seeing very cleanly is outperformance of international equities and emerging market equities,” just yet.