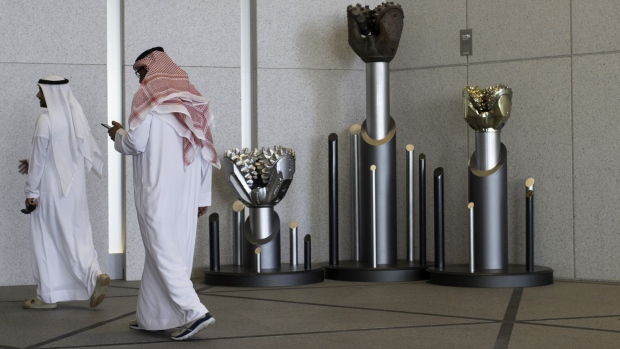 An employee checks his smartphone as he passes a display of drilling bits in the lobby of the Abu Dhabi National Oil Company (ADNOC) headquarters in Abu Dhabi, United Arab Emirates, on Thursday, Feb. 22, 2018. Adnoc is seeking to create world’s largest integrated refinery and petrochemical complex at Ruwais. , Bloomberg

Abu Dhabi National Oil Co. sold 11% of the subsidiary in what ranks as the biggest stock-sale yet in the emirate. Adnoc Drilling’s shares were offered at 2.30 dirhams each and will begin trading in Abu Dhabi on Sunday at 10 a.m. local time.

The deal comes as IPO activity in the United Arab Emirates and Saudi Arabia, particularly for energy and commodity companies, picks up. Valuations have been bolstered by this year’s surge in raw-material prices as economies recover from the coronavirus pandemic.

Adnoc Drilling’s IPO is expected to be followed soon by those of Emirates Global Aluminium and Fertiglobe Holding, a fertilizer company part-owned by Adnoc. In Saudi Arabia, a $1.2 billion listing of ACWA Power International -- the biggest in the kingdom since that of oil giant Aramco in 2019 -- will probably price on Monday.

Adnoc, which pumps almost all the UAE’s oil and gas, is increasingly seeking to raise money from its assets and help the government fund efforts to diversify the economy. Since mid-2020, it has garnered about $15 billion by selling leasing rights over pipelines and property to the likes of Brookfield Asset Management Inc. and Apollo Global Management Inc. The IPO of Adnoc Drilling is the first since it sold some of its fuel-distribution business in 2017.

(Updates from third paragraph with rise in commodity prices. An earlier version of this story corrected where Brookfield Asset Management is based.)