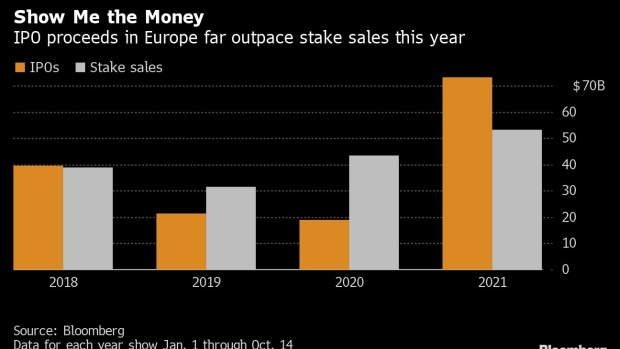 An IPO sign stands on the balcony near CAC 40 (Cotation Assistee en Continu) stock price information inside the Euronext NV exchange in Paris, France, on Tuesday, Sept. 1, 2020. France’s government isn’t giving up on Emmanuel Macron’s pro-business stance and will press on with its agenda even after huge state interventions in the economy during the coronavirus crisis, according to its trade minister. Photographer: Nathan Laine/Bloomberg , Bloomberg

Initial public offerings in Europe are outpacing stake sales for the first time since 2018, as new listings keep defying the recent market volatility that has deterred large holders from offering stock.

IPOs have raised more than $73 billion on European exchanges this year, compared with the $53 billion worth of stake sales, according to data compiled by Bloomberg.

Companies have rushed to go public throughout this year, but stake sales have been more patchy. A rally in European equities drove several large holders to take profits in May and in early September, but now such offerings have paused amid increased market risks.

“Obviously, weeks like we had at the end of September and early October, where most trading screens were red, don’t give much comfort to launch a block,” said Fabian De Smet, head of Berenberg’s investment bank in continental Europe.

This is now a buyer’s market for both IPOs and secondary selldowns, he said. “Vendors might just have to swallow a bigger discount and leave a bit more on the table for investors.”

To be sure, Europe’s listings boom is showing its own cracks, with Dutch consumer electronics retailer Coolblue on Wednesday adding to a growing pile of pulled deals. And many of the past year’s most popular IPO stocks are trading below their issue price, caught up in a rotation away from high-growth assets.

“The relative attractiveness of valuations in listed markets versus other exit options such as M&A” keeps driving the IPO market, said Francois-Olivier Mercier, UBS Group AG’s head of equity capital markets syndicate for Europe, the Middle East and Africa.