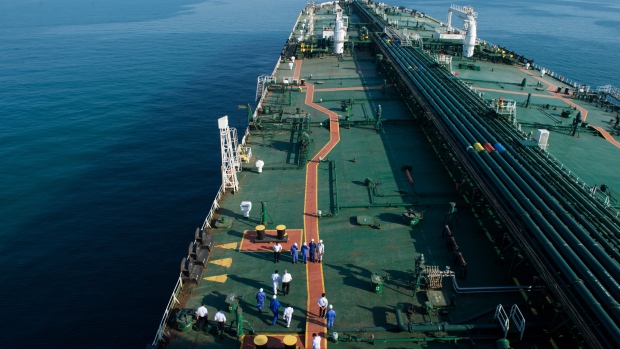 Iran set a 60-day deadline for its nuclear deal counterparts to abide by their commitments on oil and banking, saying it will stop observing restrictions on uranium enrichment if they don’t.

The move threatens the landmark 2015 accord meant to prevent Iran from developing a nuclear weapon, and will further ratchet up tensions with President Donald Trump’s administration, which walked away from the agreement a year ago. The U.S. has since imposed sanctions that squeezed Iran’s economy, triggered a currency collapse and ushered in shortages of consumer goods.

The announcement was addressed to European nations, which are struggling to reconcile the hardline stance taken by the U.S. with their desire to continue trading and engaging with the energy-rich Islamic Republic. Responding to whether European sanctions would be restored if Iran were to withdraw from some or all of the accord, French Defense Minister Florence Parly said on RMC radio that “it would probably be among things that would be examined.”

Iran “no longer holds any commitment" to observing restrictions on the storage of enriched uranium and heavy water stocks, and could also stop observing limits on uranium enrichment at a later stage, according to a statement from the Supreme National Security Council. If European partners meet their pledges, however, Iran said it will restore full compliance with the agreement, known formally as the Joint Comprehensive Plan of Action, or JCPOA.

“Whenever our demands are met, we will equally resume fulfilling commitments, otherwise the Islamic Republic will halt other commitments step by step,” the statement said.

Oil futures traded little changed in London. Prices have already jumped 29 per cent this year, in part because of U.S. efforts to tighten sanctions on Iranian oil exports. That’s added to supply disruptions from Venezuela to Libya at a time when OPEC and its allies are restraining output.

The level of nuclear enrichment Iran is allowed to pursue is at the heart of the nuclear accord because material enriched at a sufficiently high concentration could be used to produce a bomb.

As the other signatories try to work out a way to keep the deal alive, the U.S. is preparing for other options. On Sunday, the administration said it was deploying an aircraft carrier strike group to the Gulf in an “unmistakable message” to Iran that it would meet any aggression with “unrelenting force.” And on Tuesday, it said B-52 bombers were also heading for the Middle East.

The U.S. will “try to make as much rhetorical hay” as possible out of the latest Iranian announcement, said Paul Pillar, a former CIA officer who’s now a professor at Georgetown University. It “will argue that Iran’s moves support the administration’s assertions that Iran is still trying to build a nuclear weapon -- even if the specific steps that Iran takes, such as perhaps exceeding the limit on heavy water stockpiles, doesn’t really bring it any closer to having a bomb."

”On the way here, I heard that Iran intends to continue its nuclear program," Netanyahu said at a Memorial Day event in Jerusalem. “We will not allow Iran to have nuclear weapons."

Iran has repeatedly denied it was pursuing an atomic weapon.

“By leaving the JCPOA, the U.S. wanted Iran to exit the following day so it would take the file to the Security Council. Iran didn’t fall into that trap,” Iranian President Hassan Rouhani said in a televised address. We “know how important the JCPOA is and its crumbling will have a negative impact on the region and the world,” he said. “ We don’t want to leave.”

European signatories, including the European Union, have continued to back the deal rhetorically and pledged to find ways to ease the impact of U.S. sanctions. They’ve devised a special mechanism to facilitate trade with Iran despite U.S. secondary sanctions that target non-American financial and other institutions dealing with Iran. But Instex, as the vehicle is known, isn’t yet operational.

For months, Iranian officials have signaled they’re losing patience because they’re sticking to the terms of an agreement that curbs their nuclear activities but is providing few of the promised benefits.

“The Europeans would be put in a difficult spot if the Iranians re-attach some centrifuges or restart some questionable centrifuge research that may have dual uses,” said Paul Sullivan, a Middle East expert at Georgetown University’s Center for Security Studies.