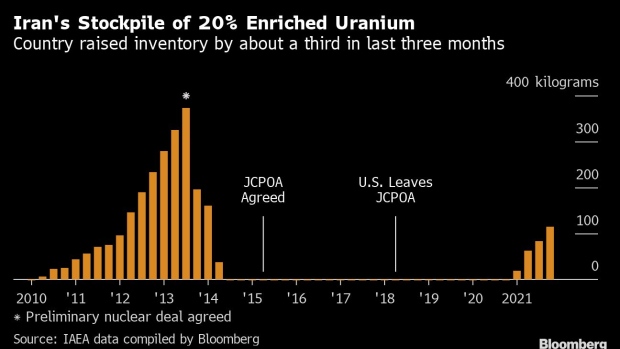 (Bloomberg) -- International nuclear inspectors say they’re on the brink of losing irrecoverable knowledge about some of Iran’s atomic activities, signaling a mounting sense of urgency ahead of next week’s talks between the Islamic Republic and world powers.

International Atomic Energy Agency Director General Rafael Grossi issued the warning on Wednesday following a trip to Tehran that failed to ease concerns over a lack of monitoring at a centrifuge workshop outside of Iran’s capital.

While IAEA inspectors continue to collect fine-grained data about the quantity and purity-levels of Iran’s nuclear-fuel stockpile, they’ve been unable to mount surveillance gear at the factory in Karaj, which makes components for the fast-spinning machines that separate uranium isotopes.

“We are close to the point when I would not be able to guarantee continuity of knowledge,” Grossi said at a press briefing in Vienna, where the IAEA’s board of governors has convened to discuss Iran’s nuclear activities. “We have to solve this issue very quickly.”

Western diplomats have warned for months that Iran’s lack of cooperation with inspectors could result in a resolution of censure, a move that has the potential to send the country’s nuclear case back to the UN Security Council.

Iran says such a measure would reduce the already dwindling possibility of reviving its landmark nuclear accord, known as the JCPOA, struck in 2015 with China, France, Germany, Russia, the U.K. and U.S.

Restoring that deal -- which capped Iran’s atomic program in return for sanctions relief until it was abandoned by the Trump administration three years ago -- could ease tensions in the Persian Gulf and allow Tehran to return to global oil markets.

The Argentine diplomat described his meeting on Tuesday with Iranian Foreign Minister Hossein Amirabdollahian as “inconclusive.” While the sides continue to communicate, they failed to reach any sort of agreement that would alleviate the agency’s doubts.

IAEA inspectors reported this month that Iran continues stonewalling their attempts to explain the source of decades-old uranium traces detected at undeclared locations. Iran is also alleged to have intimidated some inspectors by imposing excessive security measures following last year’s sabotage of a uranium-enrichment plant.

Tehran’s stock of uranium enriched to 60%, not that far short of what’s required to build a nuclear weapon, has expanded. Iran insists its nuclear program is for peaceful civilian uses but western fears it might get close to developing a bomb catalyzed the diplomacy leading up to the 2015 deal.

“It is clear there are mutual influences,” Grossi said about the impact of the JCPOA talks that resume Nov. 29 on inspections. “What may happen in one place may have an impact on the other.”

While the IAEA isn’t a formal party to the nuclear deal, its inspectors are supposed to provide the guarantees that Iran is abiding by its part of the bargain. That job became more difficult starting in 2018 after then President Donald Trump withdrew the U.S.

Facing new U.S. penalties that choked its economy, Iran retaliated by breaking limits on uranium enrichment and restricting IAEA access to some of its facilities. One of the central features of the JCPOA had been the unprecedented access it gave to international monitors.

The standoff fueled regional tensions between Iran and its rivals in the Persian Gulf, which witnessed a spate of attacks on international shipping.