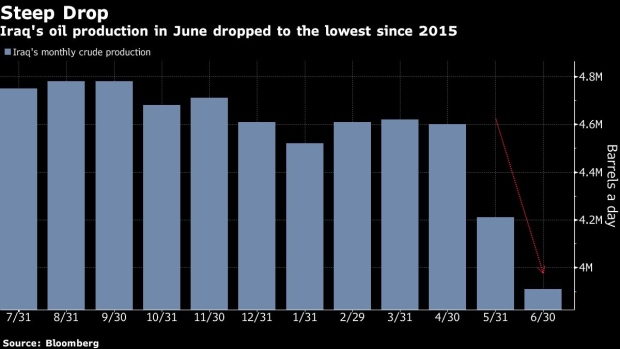 (Bloomberg) -- Iraq will supply less oil to some refiners in Asia and Europe as it seeks to meet its production-cut target under the OPEC+ output agreement.

SOMO, the state-run oil marketing company in OPEC’s second-biggest producer, notified at least six customers in Asia that it won’t fulfill their requests for contractual supplies loading next month, according to company officials with knowledge of the refineries’ crude procurement. Two buyers were told they wouldn’t receive any Basrah oil and that SOMO will try to accommodate their needs in the following month, the officials said.

Three other Asian customers were given smaller volumes, another only got one-third of what it was seeking, while five refiners received what they asked for. In Europe, at least three buyers were given reduced contractual supplies, while another got full volumes, according to people familiar with the situation.

The reduction in supply of the medium and heavy-sour Basrah grades comes at a time when those varieties are already highly sought after. The OPEC+ output curbs and shrinking flows from Iran and Venezuela have led to scarcity, while lighter crudes that yield more jet fuel are less in demand at the moment.

However, in what some buyers said was another surprising move, SOMO offered 1 million barrels of its Basrah Light crude for late August loading in a tender document dated July 15.

Iraq, which has a reputation of not meeting its production-cut targets in the past, has come under increased pressure from Saudi Arabia and other OPEC+ members to curb output as the coronavirus eviscerated demand. It slashed the term oil supplies to several Asian and European buyers by 40-80% for July.

On Wednesday, Iraq agreed to a schedule of compensatory cuts to make up for lagging on its target under the OPEC+ deal, according to a delegate. The nation will trim an extra 70,000 barrels a day in July, followed by an additional 314,000 barrels and 313,000 barrels in August and September, respectively.

Earlier this week, Saudi Arabia commended Iraq for implementing almost all of its pledged output curbs in further signs that disputes among OPEC+ producers over cheating of quotas are being resolved.