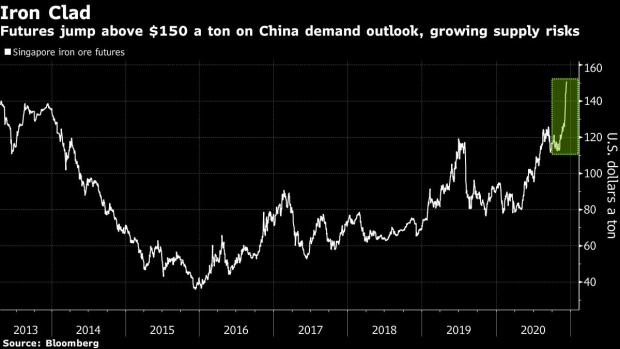 (Bloomberg) -- A surge in demand in China, the world’s key growth engine, risks a shortage of iron ore that’s pushed prices past $150 a ton and crowned it this year’s best-performing major commodity.

Futures in Singapore have surged almost 70% this year, hitting their highest since trading started in 2013, as China’s stimulus-led rebound fuels steel output and consumption. The rally received an added boost from Vale SA’s cut to annual production guidance last week, while the first quarter is likely to bring elevated risks of weather disruptions for southern hemisphere producers.

At the heart of the rally is China’s position as the only major economy to see a sustained and robust rebound from a pandemic-driven slump this year, with investment in infrastructure a key pillar of growth. That’s boosting steel demand, buoying prices of the alloy and encouraging the top steelmaker to increase output even as input costs rise.

It’s also got Chinese buyers seeking an intervention, shares of Australian producers BHP Group and Rio Tinto Group soaring, while some market watchers are starting to caution that prices are rising beyond what’s justified by fundamentals.

“The market is in disequilibrium right now -- investors are trading industrial metals like iron ore as a speculative play on how China’s economy is going to perform,” said Atilla Widnell, co-founder at Navigate Commodities. “There is no way iron ore can be at $150 based on demand and supply fundamentals.”

Morgan Stanley said prices look increasingly overbought, though it forecast a deficit, while Goldman Sachs Group Inc. has highlighted the potential for more upside amid a shortage. Australia & New Zealand Banking Group Ltd. warned moderating steel production could pave the way for softer iron ore demand even as it predicted a tight market next year.

Goldman Sachs said this week it expects a “substantial” deficit next year, with resilient demand and restrained supply set to sustain bullish price momentum. Morgan Stanley forecasts a particularly tight first half of 2021, which will support prices above $100 a ton.

On the supply side, shipments from Brazil in November dropped below 30 million tons for the first time since May. Vale’s lower production guidance for 2020 shows it’s struggling to return capacity after a dam disaster last year, and the company said it had taken a conservative approach to guiding for 2021.

Figures from Australia’s Port Hedland, the biggest export terminal, showed a slight decline in shipments in November. On Thursday, the Pilbara Ports Authority issued cyclone advice and said it was clearing the port and anchorages of large vessels. There’s also concern that recommendations stemming from an inquiry into Rio’s destruction of an Aboriginal heritage site could impact Western Australian iron ore output.

“The bull market for iron ore is set to extend into 2021,” Goldman said in its Dec. 8 report. “We now expect another substantial deficit next year, supported by a combination of only gradually decelerating China steel demand growth, sharply re-accelerating Western steel demand growth and tepid supply growth.”