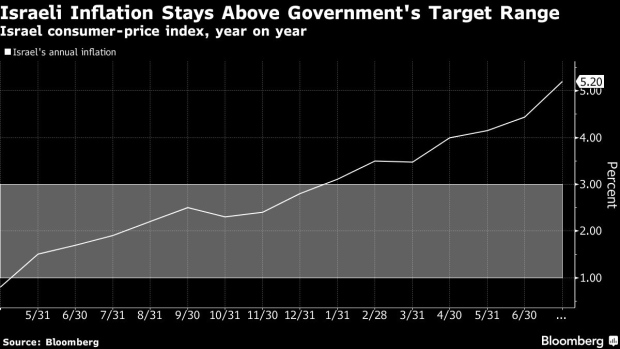 Shoppers pass between stalls in Carmel Market in Tel Aviv, Israel, on Monday, Sept. 20, 2021. A third dose of the Pfizer Inc.-BioNTech SE Covid vaccine can dramatically reduce rates of Covid-related illness in people 60 and older, according to data from a short-term study in Israel. Photographer: Kobi Wolf/Bloomberg , Bloomberg

(Bloomberg) -- Israel’s annual inflation and economic growth topped all forecasts as price gains accelerated to their fastest level since October 2008, adding urgency to the central bank’s cycle of interest-rate increases.

Spurred by a rise in the cost of fresh fruit, transportation and housing, prices jumped an annual 5.2% in July from 4.4% in June. And in a sign the economy is picking up, gross domestic product expanded a seasonally adjusted, annualized 6.8% in the second quarter after a contraction in the previous three months, according to data released on Tuesday.

The surprise figures will shape views on how aggressively the Bank of Israel may have to raise borrowing costs at its meeting next week. It’s already tried to get ahead of inflation by delivering three consecutive hikes, including the largest since 2011, and increasing the pace of monetary tightening every time it raised rates this year.

Inflation has been stuck above the government’s 1% to 3% target since January. On a monthly basis, price growth reached 1.1% in July, nearly twice the median prediction in another Bloomberg survey.

The outlook for Israeli inflation was turning favorable after gains in the shekel in recent weeks. But the currency depreciated sharply on Monday and closed about 1.3% weaker against the dollar. It was little changed on Tuesday.

Goldman Sachs Group Inc. analysts Tadas Gedminas and Kevin Daly said after the data release that “there is now material upside risks” to their call for a half-a-percentage-point rate hike next week, with a possible move up by 75 basis points to 2%.

Given the bigger-than-anticipated GDP upswing, as well as historical revisions, Goldman raised its Israeli economic growth forecast by 1.5 percentage points to 6.2% for 2022.

An intensification of price pressures in housing “suggests that one of the key domestic inflation risks that the Bank of Israel had been flagging is materializing,” Gedminas and Daly said.

“Next week’s meeting is likely to be significant in terms of revealing the Bank of Israel’s reaction function and how it balances domestic and external factors shaping the inflation outlook,” they said.