Most Canadian consumers plan to do holiday shopping on Black Friday: Study

From toy stores to electronics outlets, it’s the moment retailers have been preparing for all year.

As Black Friday kicks off the traditional holiday shopping season, there’s a lot on the line. For a department store like Macy’s Inc. or Kohl’s Corp., a third or more of annual revenue is captured in the fourth quarter.

Now the big money comes out. After weeks of slow and steady buying, consumers could come out in droves this weekend -- giving investors a sneak peak at the likely winners and losers of the holiday shopping season. Here’s a look at the latest information available, with all time stamps reflecting the U.S. East Coast:

In Sweden, retailers concerned about shoppers’ stress levels while hunting for Black Friday deals have turned to a disc jockey to help compile calming music to play in stores. Auntie Flo, whose real name is Brian d’Souza, has worked with Unibail-Rodamco-Westfield, one of the the world’s largest shopping mall developers, to provide playlists for all Westfield shopping centers across Sweden. Last year he also curated Black Friday playlists for Selfridges, the U.K. department store.

D’Souza, who hails from Glasgow, Scotland, focuses on using a form of sound therapy called binaural beats, where different pure-tone sounds are combined to create a relaxing, calming effect. That may not be the best strategy on Black Friday, according to Phil Dorrell from the consultancy group Retail Remedy.

“Retailers want shoppers to celebrate, think of the good times coming with Christmas and get in the party mood,” Dorrell said. “It’s not about trying to calm them down.”

At the Target store in Elmhurst, New York, manager Kelly McGarrity and her employees belted out karaoke to get fired up before the doors opened at 5 p.m. Thanksgiving Day. Crowds were on par with past years, she said, and early-bird shoppers snapped up deals on 65-inch 4K televisions, pressure cookers and merchandise from Walt Disney Co.’s Frozen movie sequel.

Buying online and picking up in the store was a popular option as well, and 106 staffers were on hand to pack and prep online orders, up from 70 last year. Those waiting in line for their web orders grabbed inexpensive impulse items as well, McGarrity said. Christmas trees were a hot item online, with orders for more than 100 coming in on Thursday alone.

Sales on Thanksgiving itself are on the rise in the U.S., according to Adobe Analytics, which forecast 2019 as the first year that online sales surpass $4 billion on the holiday. A larger portion of these transactions are being made on smartphones, Adobe said in a report on U.S. e-commerce activity.

“It’s clear that shoppers are devoting more time to shopping on Thanksgiving than ever,” said Vivek Pandya, lead digital analyst at Adobe. She said sales would surge in the afternoon and evening as consumers “step away from their dinner tables and divert more attention to shopping for the best deals.”

A survey from Deloitte shows that 79 per cent of U.S. respondents plan to go shopping over the five-day holiday weekend, which is higher than last year. The estimated spending of $415 per household is similar to last year’s pre-holiday estimate.

The trend of brick-and-mortar losing ground to e-commerce is also expected to continue, with participants planning about 53 per cent of their spending via online sources and 43 per cent in stores.

A separate study from the National Retail Federation puts expected outlays for the entire season at almost US$1,050 per consumer. 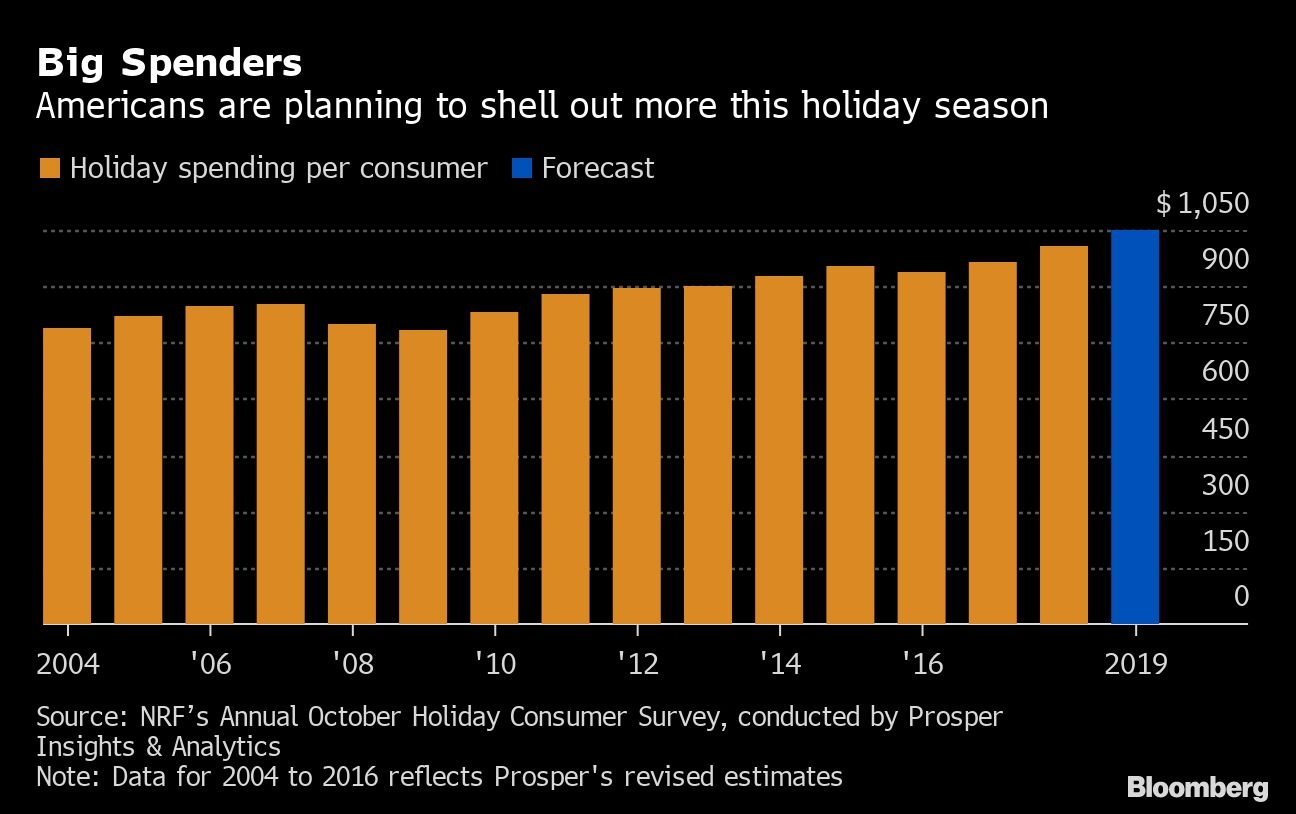 Black Friday is always a critical day for retailers, but the stakes may feel even higher this year, and the calendar is to blame. With Thanksgiving falling on its latest possible date, there are only 26 shopping days between your turkey dinner and Christmas -- compared to 32 last year. That has some companies in a panic, and it means physical stores could feel more crowded than normal in the coming weeks as buyers try to cram all their shopping into a shorter window. 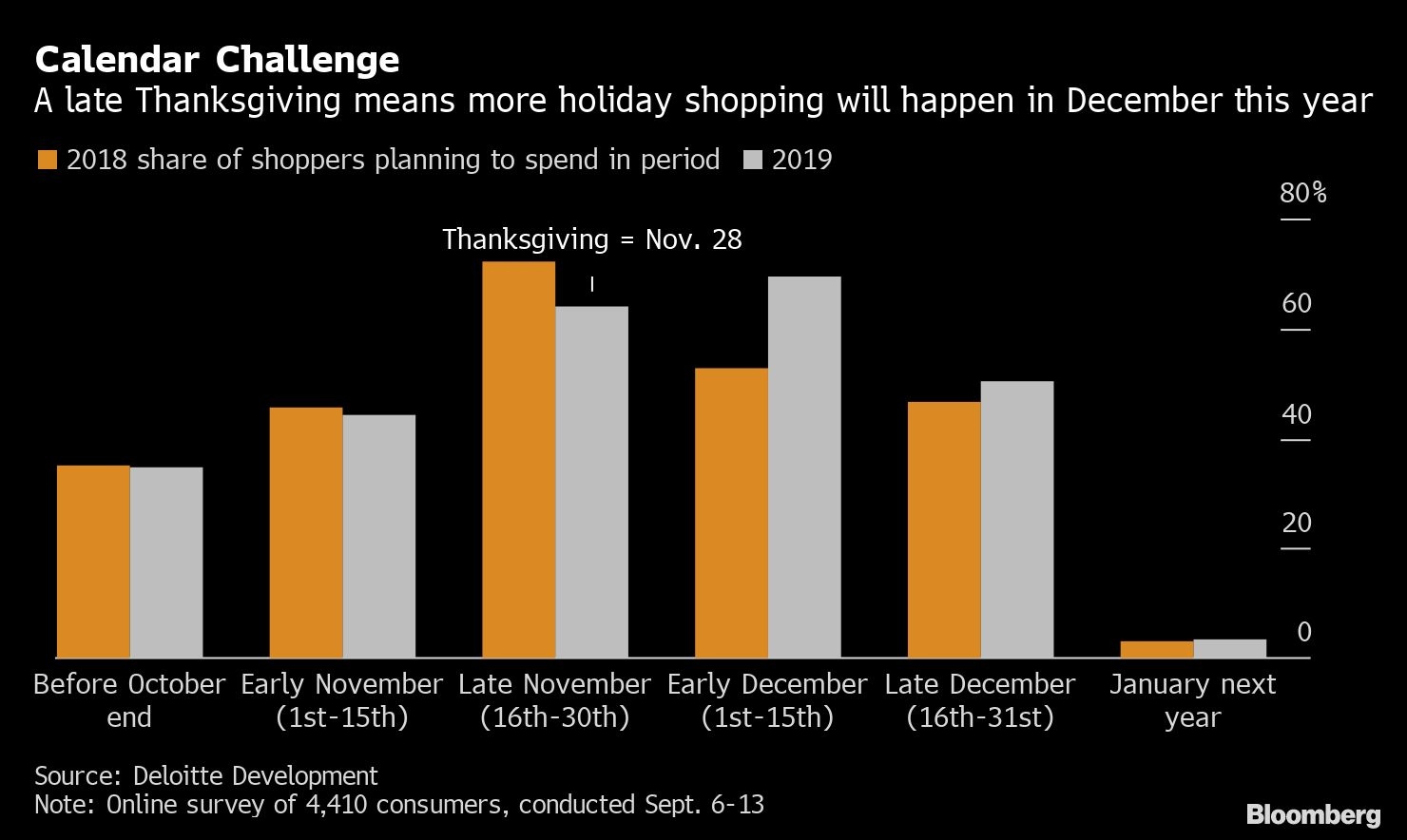 Craig Johnson, president of Customer Growth Partners LLC, agreed that the briefer window shouldn’t alter the total dollars spent. “Statistically, the holiday shopping season is November and December, and unless I’m mistaken, that means it’s 61 days every year,” he said in the weeks leading up to the event. So when retailers bemoan a shortened holiday, “they’re using it as an excuse.”

The biggest players are going into the holiday period with momentum, early data indicate. Walmart and Amazon.com Inc. saw the biggest jumps in online consumer spending in the run-up to Thanksgiving compared with a year earlier, according to a report from Edison Trends, an e-commerce research company.

Walmart saw a 53 per cent in increase in web spending, while Amazon had a 37% increase and Nordstrom Inc. climbed 35 per cent, according to the study. Best Buy Co., Target, Etsy Inc. and Macy’s also registered higher spending. On the other end of the spectrum, Kohl’s, EBay Inc. and J.C. Penney Co. all registered negative numbers from a year earlier.

Edison Trends based its analysis on more than 700,000 transactions.