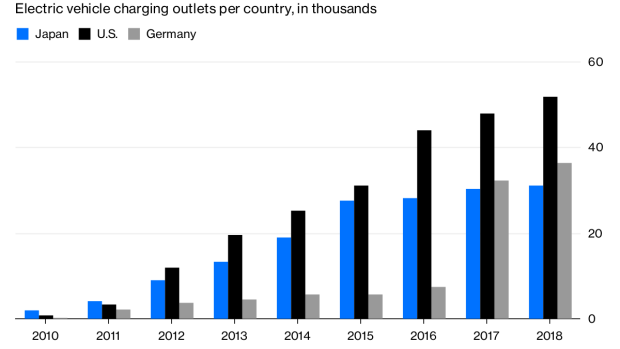 (Bloomberg Opinion) -- 2018 is shaping up to be a record year for electric vehicles. My Bloomberg NEF colleagues expect 1.9 million EVs will have been sold last year, up from 1.1 million the year before, with the bulk of those sales in Asia. Overall, China’s new passenger vehicle sales were in significant decline for the first time in more than 20 years.

Rapid growth requires the infrastructure to keep those electric vehicles charging on road trips, at offices or any time their owners aren’t plugging in at home. That infrastructure is being built in major auto markets — and some new behaviors are cropping up, too, as electric vehicle charging outlets are being built at retailers, apartment complexes and especially at gas stations.

There are currently about 50,000 fast-charging outlets in the U.S., and Germany and Japan have 30,000 to 40,000 each. However, as Bloomberg News’s Marie Mawad found out during her recent drive from Paris to Mannheim, Germany, there are still not enough charging outlets to set a road-tripping EV driver’s mind at ease.

China has … a few more. And for good reason: Very few drivers in China have personal garages in which to slow-charge overnight.

Meanwhile, by the end of last year, there were reports of U.S. drivers being “ICEd out”: drivers of internal combustion engine cars deliberately occupying dedicated charging spots, preventing EV drivers from using them. Besides being deliberate and hostile, it’s not an exaggeration to call such behavior the result of a culture clash between the environmentally minded and coal-rolling enthusiasts. More plainly, perhaps, it is new versus old.

That raises a few questions for me. First, where else will such behavior begin to happen?

The number of filling stations is stable in the U.K., too, but only after a dramatic decline over the past 50 years.

Second, how long might this behavior last? Are we in for decades of EV drivers being ICEd out at filling stations that have only a few chargers on the lot?

Electric vehicle drivers also will be treated to, or possibly demand, a different set of experiences to fill the time required to charge, such as shopping and children’s activities, in dedicated spots that are quieter than gas stations — and fume-free. If there’s a culture clash between EV drivers and those who prefer internal combustion engines, it might not last long as they spend less and less time in proximity.

I’m not certain, either, that the big players in today’s roadside landscape will have the same dominance in building, owning and operating electric vehicle infrastructure. Volkswagen AG, for instance, announced that it will create an entirely new company, Elli, that will sustainably provide energy and charging services. And while integrated oil companies like BP Plc and Total SA have acquired charging networks, I think they will find some challengers in potentially unexpected places.

The good thing, from the oil majors’ perspective, is that electric vehicle chargers are a network of endpoints, so to speak, that can be incorporated into an existing asset base. But by the same token, if this is a network that taps into something any company has access to (in this instance, the electricity grid), then the competitive advantage isn’t in the logistics of fuel delivery, owning sites or possessing the hydrocarbons.

The competitive advantage will lie in what other things a company can offer to drivers who have a half-hour or more to spend with a company. It could be still be necessities, but it could also be luxury goods, fine food or even experiences. Whatever it might be, it probably won’t involve being ICEd out.