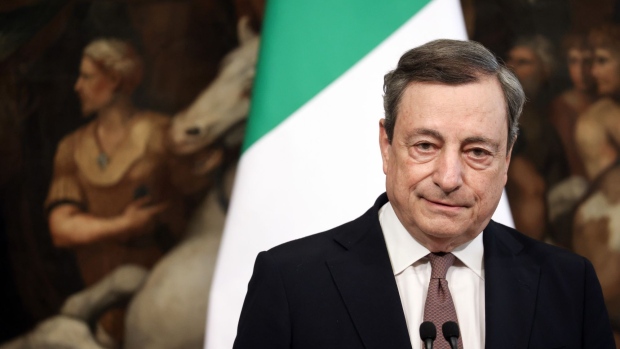 The Italian national flag flies near a monument to the unknown soldier in Rome, Italy, on Wednesday, Aug. 21, 2019. Italian President Sergio Mattarella begins intensive talks with political leaders Wednesday to determine whether a new ruling coalition is viable, as the head of one of the country’s main parties signaled willingness to explore a new parliamentary majority. Photographer: Alessia Pierdomenico/Bloomberg , Bloomberg

The credit quality of the European nation, which is rated Baa3 by Moody’s, is under pressure from heightened government risk that could impede structural reforms, including those in Italy’s National Recovery and Resilience Plan, Moody’s analysts Sarah Carlson and Alejandro Olivo wrote on Friday.

“Risks to Italy’s credit profile have been accumulating more recently because of the economic impact of Russia’s invasion of Ukraine and domestic political developments, both of which could have material credit implications,” the analysts said. “Significant reliance on gas for its energy exposes Italy to further cuts in supply from Russia, as well as higher energy prices.”

Moody’s also cited a potential deterioration in the outlook for Italy’s public accounts due to “sluggish growth, higher funding costs, and potentially weaker fiscal discipline.” Early elections are expected to increase uncertainty. Draghi is heading a caretaker government until snap elections in September following the breakup of his coalition last month.

In a response late Friday, Italy’s finance ministry said the ratings action was “questionable” and not justified by economic conditions. Italy’s high public debt level was already reflected in its rating, and economic risks tilted to the downside are a general condition of all advanced economies, the ministry’s note added.

Italy’s upcoming elections “do not constitute an anomaly in the context of European democracies,” the ministry said, adding that it remains confident reform plans linked to European funds and national energy security policies will be implemented “promptly” even after the vote.

Italy carries a score of BBB by both Fitch Ratings and S&P Global Ratings. S&P lowered its outlook on Italy in late July.

The euro maintained its losses on Friday, falling with all of its Group-of-10 currencies against a strong dollar. Italian bond and equity markets were closed at the time of the rating announcement.